Exhibition Explorers at the Shipley – what our youngest visitors can teach us.

Last week our exciting new project Exhibition Explorers began. Sixteen children aged 1 and 2 and their grown-ups joined us to embark on an exciting six month journey of discovery, finding new ways of enjoying galleries and museums together.

This project is focused on introducing toddlers to museums and galleries, enjoying cultural days out as a family, and creating keepsakes of the children’s early cultural experiences. As the families have committed to a six month project, it’s a great chance to for the families to get to know one another and the gallery itself, and for us as an organisation to get to know this audience.

Each session at the Shipley will focus on the themes of ‘make, play, explore’ and be facilitated by Claudia Knott, who has worked with us on several Early Years projects before. At the first session we set the scene with a circle of colourful cushions beneath the Tintoretto, and three intriguing, colour changing lights. As families arrived they joined the circle where we sang together and then introduced the session and the first explorer activity. For this, the families were offered a range of tools to take around the exhibitions, to help them look at the artworks. There were magnifying glasses, ‘I Spy’ cards to match to the artworks; transparent coloured paddles to look through; frames to look through to make their own compositions; and cuddly toy sea creatures to take around on a gallery tour. In this photo you can see the children eager to get started with the explorer tools – one of them already looking through the magnifying glass. 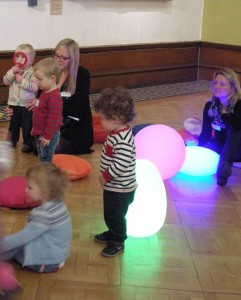 After exploring the galleries in this way, it was time for some museum-themed play amongst the artworks. All the activities offered open ended play opportunities, in which children played around the theme of museum collections. One play area offered a range of interesting little objects hidden in boxes and baskets, which children could take out and sort into display cases, to make their own museums. 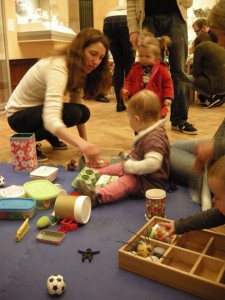 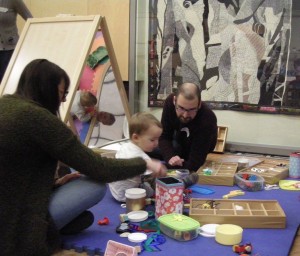 Sorting a range of objects into display cases.

We also made playdough creations amongst the ceramic displays. Throughout the activities there was lots of chat between children and parents, as everyone enthusiastically got involved: 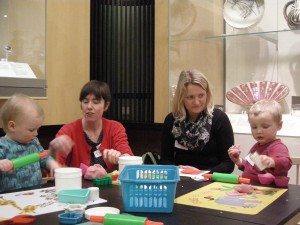 The lift-the-flap museum was another popular activity; here children chose a picture of a museum object to stick under a lift-the-flap paper display case, and curated their own displays. 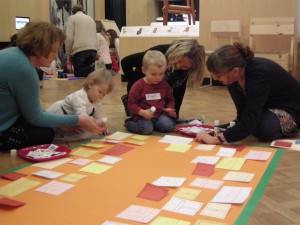 Making our own museum by sticking pictures under the lift-the-flap display cases.

In Early Years play there are a variety of schema at work – these schema are repeated behaviours that young children compulsively display, and which are instrumental in their brain development. The Exhibtion Explorers session featured activities designed to complement certain schema – for example, in arranging their museum displays, the children predominantly exhibited the Positioning Schema (which focuses on ordering and categorising objects) and the Container Schema (which focuses on filling and emptying vessels, boxes and enclosures). Through the playdough activity, the Connection Schema played out, in which components were linked together, destroyed, rebuilt etc. And when two colour of playdough were combined it was the Transformation Schema at work, with children motivated by the potential to mix, change the colours, and make new creations. In making lift-the-flap museum displays, the children exhibited the Enveloping Schema – an extension of the ever-amusing ‘peek-a-boo’ game, which is about learning that objects remain in existence, even when out of sight.

Through their play, the children initiated several other schema which we hadn’t sought to cultivate, but which were equally important – and fascinating to observe. For example, the mirrored den created a tunnel through which the Transporting Schema occured, as children moved objects from one place to another. The Rotation Schema was also apparent as children spun in joyful circles in the open spaces, and did laps of the gallery with pull-along toys on wheels. And the Orientation Schema – about repositioning oneself and viewing the world from different angles – occured periodically as children lay on the floor to investigate the patterned tiles, or climbed under display cases. All were fascinating to observe and will certainly shape the play opportunties we develop over the course of the project.

At the end of the session we gathered for storytime, which in an extension of the Container and Enveloping Schema, focused on Spot the Dog hiding in a basket. We then enjoyed some energetic lycra games, bouncing small toys on the lycra as we sang. 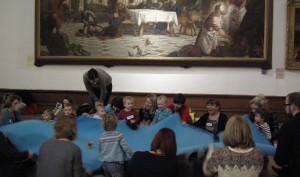 Next month we’ll meet again for more creative play and exploration in the Shipley. In the meantime, the families are encouraged to embark on a ‘Family Adventure’, visiting a museum or gallery of their choice and scrapbooking about the experience to add to our Exhibition Explorers Encyclopaedia! This will form a record of early cultural experiences that grows alongside the children. It’ll be supplemented by blog posts here, providing a resource for families to dip into for ideas and recommendations about cultural venues to visit. We’re also asking the families to complete a small card with their thoughts on the first session, and their feelings about visiting cultural venues with their children, to help us chart their Exhibition Explorers journey.

Watch this space for all the exciting developments ahead!

2 Responses to Exhibition Explorers at the Shipley – what our youngest visitors can teach us.