I’m happy to report that work is continuing well on the ‘We Mak’em’ Shipbuilding Archives project. The records of the firm Bartram & Sons Ltd are now fully catalogued (TWAM ref. DS.BM) and can be searched using our online catalogue. The collection includes over a thousand ships plans, which have never before been accessible to the public.

Work is also progressing smoothly on the other collections in the project. I’m currently working on the operational records of William Doxford & Sons Ltd, which includes an excellent series of ships particulars books covering the years 1871-1969. Colin has recently finished cataloguing the many ships plans we hold for Joseph L. Thompson & Sons Ltd. Some of those date back to the 1880s, including this profile plan of the ‘Coogee’ (TWAM ref. DS.JLT/4/PL/1/224/9).

A photograph of ‘Coogee’ appeared in an earlier blog and in her heyday she was one of the fastest single-screw passenger vessels of her size. She now lies shipwrecked outside Port Philip Bay, Melbourne, Australia, and is a popular destination for divers.

A few days ago, Colin also uncovered a very nice plan of the ‘Scottish Admiral’, built by William Doxford & Sons in 1878 (TWAM ref. DS.DOX/4/PL/1/104/1). I’m particularly delighted about this find because it’s the earliest plan that we hold for that shipyard. 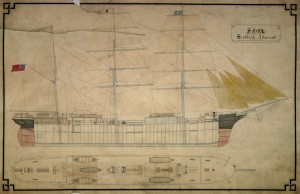 The ‘Scottish Admiral’ was built for the Australian shipowners McIlwraith McEacharn and Company to carry British migrants across to Queensland. Sadly, she sank in February 1894 after being run down while laid up in the River Medway.

Exciting though these discoveries are, they pale in comparison to a deposit of ships plans and photographs that the Archives recently received.  These items were part of an exchange of documents between Tyne & Wear Archives and Durham County Record Office. This involved the addition to our collections of over one hundred plans and photographs, which formerly belonged to the Sunderland shipbuilding firm of Austin & Pickersgill Ltd. In return we handed over more than a hundred deeds relating to the landed estates of the shipbuilder, Robert Thompson.

Transfers of this kind are quite common in the world of archives. Austin & Pickersgill originally deposited the plans and photographs in Durham back in the 1960s. At that time Sunderland was still part of County Durham and Tyne & Wear Archives didn’t even exist. The estate papers that we handed over came to us as part of a vast deposit of documents placed in our care by Sunderland Shipbuilders Ltd in the 1980s. The papers relate to Robert Thompson’s property at Sockburn, County Durham. Those lands lie such a long way from Tyne & Wear that it made perfect sense for them to be ‘repatriated’ to a more suitable home.

The plans and photographs are a fantastic addition to our Sunderland shipbuilding collections. There are some great early plans of vessels built by William Pickersgill & Sons. These include a rigging plan of the ‘Mary Roberts’ (TWAM ref. DS.WP/4/PL/1/76/6), which was the subject of a blog back in March. 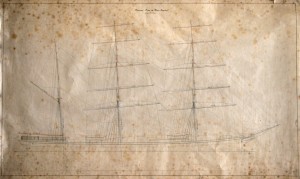 These plans are exceptional because they are among the earliest Sunderland ships plans that we hold and relate to some of the last sailing ships to be built on the Wear.

The new material also includes over a dozen plans of vessels built by the shipyard of Sir John Priestman & Co. These appear to be the only plans to have survived from that yard, making them of real historical importance. In 1944 the yard, which was based at Southwick, was taken over by William Pickersgill & Sons Ltd, which explains how the documents fell into the hands of Austin & Pickersgill.

As I mentioned the new material also includes some ships photographs. Most of these are of vessels built by William Pickersgill & Sons Ltd dating from the 1930s to the 1950s, including this excellent image of the launch of ‘Sir Archibald Page’ in September 1950 (TWAM ref. 5250). 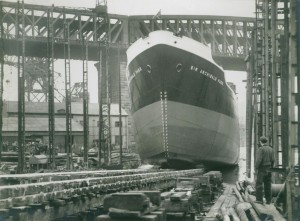 There are also a small number of much earlier images relating to ships built by other firms. Probably the best of these is this view of the cargo ship ‘Moraitis’ at sea in 1907 (TWAM ref. 5250). She was built by Sir John Priestman & Company and this appears to be our only photograph from that shipyard. 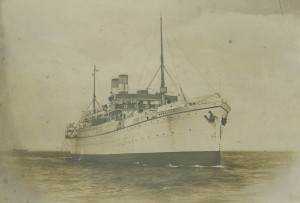 I’m very grateful to the staff at Durham County Record Office for agreeing to transfer these documents to us. They are an excellent complement to our other Sunderland shipbuilding archives and I’m sure that they will be very well used and enjoyed in the future.

6 Responses to Exciting new additions to our Sunderland shipbuilding collections