I’m pleased to report that the ‘Workshop of the World’ project to catalogue the records of Vickers Armstrong is progressing well. I’m continuing to work through the large quantity of unlisted material in the collection and will look forward to highlighting some of the most exciting finds in future blogs.

Since my last blog I’ve acquired an enthusiastic volunteer. The kind soul helping me is Colin Boyd, who worked with me on the ‘We Mak’em’ Sunderland Shipbuilding Archives project. Colin has a strong interest in ships, tanks and guns so is the perfect person to have onboard. He’s currently listing the crane plans in the collection and has come across a few interesting items including an early deck crane for a screw collier ordered by Richard Young of Wisbech in 1854. Young was a prominent ship owner who served five times as Mayor of Wisbech, 1858-1863, was MP for Cambridgeshire, 1865-1868 and served as Sheriff of London and Middlesex in 1871, the year he died. 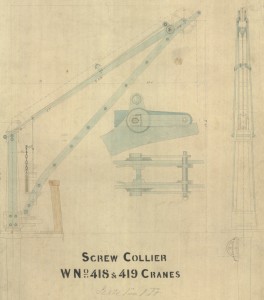 The main focus of this month’s blog, however, is an exciting addition to the Vickers Armstrong collection. The document in question is a printed album entitled ‘Warships and War Materials’ produced by Sir W.G. Armstrong Whitworth & Co. Ltd around 1904 (TWAM ref. 5484). It’s full of superb images of the firm’s premises and products and has very generously been deposited by Sue Wilson CBE, a former director of Vickers Defence Systems.

The album doesn’t just include views of the firm’s premises in Newcastle upon Tyne but also covers the Openshaw Works in Manchester, the Thames Ammunition Works and the company’s interests in Italy. It’s a superb document and there’s enough material to fill a dozen blogs. For the moment, though, I thought I’d share a few interior views of the Elswick and Scotswood Works. These images have really captured my imagination because they give us a glimpse into the firm just a decade before the outbreak of the First World War.

There’s a great view of some of the hydraulic forging presses inside the Elswick Steel Works. 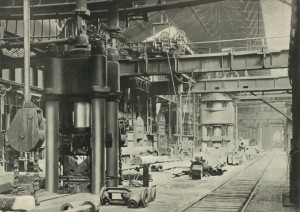 View of hydraulic forging presses in a bay at the Elswick Steel Works (TWAM ref. 5484)

The album explains that the presses “are capable of turning out solid and hollow gun forgings that may be required in connection with the heaviest artillery in use either ashore or afloat”. The Steel Works alone employed nearly 1,500 people.

The Ordnance Works at Elswick feature very prominently in the album. In 1904 it consisted of 93 buildings, including forty large workshops. 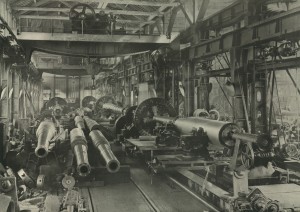 View of one of the Heavy Gun Machine Shops at the Elswick Works (TWAM ref. 5484)

This image shows 8”, 9.2” and 12” guns being machined. The album includes a note that all the guns are ribbon wound and that the total length of wire ribbon used in a 12” gun was 123.5 miles. The album also contains a view of the Gun Inspection Department. 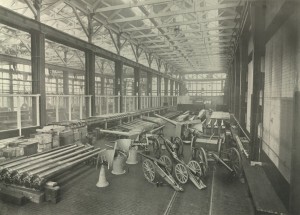 After completion in the manufacturing shops each gun was sent there. Checks included examination of the bore, rifling, outside dimensions of the gun, ease of working of the breech mechanism and the fitting of spare parts. The firm built over 5,000 guns and 7,000 mountings during the period 1893-1903. These numbers would be dwarfed during the First World War when the Elswick Works went on to produce 13,000 guns and 12,000 mountings.

I always think photographs which capture people going about their daily work are particularly special so I also thought it would be nice to share this view of the sawmills at the Scotswood Works. 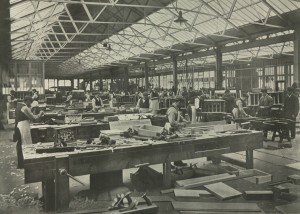 Workers in the sawmills at the Scotswood Works (TWAM ref. 5484)

The sawmill was spread over three floors and included “a complete plant for the manufacture of Artillery wheels, consisting of spoke copying machines, spoke lathes, wheel lathes, one machine for felloe bending and a hydraulic tyring press for tyring wheels cold. The second floor contains small machinery, joiners’ benches, saddlers’ shop and a painting and varnishing shop”.

Sue Wilson’s generosity in depositing this superb document with us is really appreciated. If any current or former employees have any documents that they would be interested in adding to the Archive collection then I would be delighted to hear from them. By depositing with a record office you’re not just sharing documents with a wider audience but you’re also helping to secure their long-term preservation.

38 Responses to Exciting new addition to the Vickers Armstrong collection