One of the most pleasurable things about working with the archaeology in the Great North Museum is the sheer variety of material we have in our collections.  I am always learning something new and adding to my own knowledge.  Sometimes, however, there are objects that do not want to give up their secrets.

In the Ice Age to Iron Age Gallery of the museum we have a carved stone ball from Houghton-le-Side in County Durham.  This object dates to the Neolithic or New Stone Age period (about 4000 – 2500 BC) when farming was first introduced into the British Isles.  Stone Balls like this one are relatively common with at least 418 examples known, but almost all of them come from North East Scotland, with hardly any found in England.  This makes the Great North Museum’s ball very unusual.  These objects were clearly significant to people in the Neolithic as a great deal of time and effort must have gone into carving them.  The trouble is that their exact significance is not clear.  Over the years a number of theories about them have been proposed.  Suggestions include their use as a mace head, a weight or even part of a bolas, a throwing weapon made of weights attached to interconnected cords.    In the museum we have said that the object probably served some ritual purpose, which is really a tacit admission that we do not know what it was for. 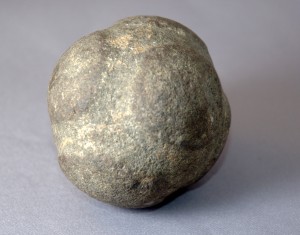 Another enigmatic object can be found in the Hadrian’s Wall Gallery of the museum.  This is a Roman bronze dodecahedron from South Shields.  Like the Neolithic stone balls there are quite a few examples of these objects, most of which come from the northern half of the Roman Empire and date from the 1st to 4th Centuries AD.  There are no literary references or contemporary pictures of these objects and there have been many ingenious ideas about how they might have been used.  These range from candlesticks to surveying instruments and once again the suggestion has been made that they are connected to some form of ritual practice.  My personal favourite theory is that they were used for knitting gloves (https://www.youtube.com/watch?v=poGapxsanaI).  This certainly would explain their distribution in colder northern areas. 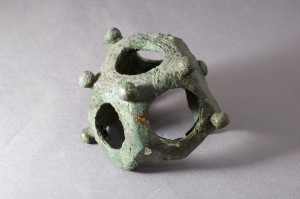 Both these objects illustrate the fact that despite all the archaeological research and accumulated knowledge of the past there are still objects that cannot be explained and this is one of the many reasons why I enjoy the subject so much.