At the end of a discussion with Mr Richardson and his wife at Discovery Museum today I found myself quite emotional! We had spoken a few times on the phone to arrange this meeting. For years Mr Richardson had been searching for a suitable home for two items. His search had led him to Scotland and a regimental museum, among other places, and finally to me at DiscoveryMuseum.

Bringing the items for me to see wasn’t straightforward as Mr Richardson and his wife live in Surrey. After our conversation about donating to the museum Mr Richardson decided to make his first visit to the North East for a holiday. While here he promised to call in to see me.

Mr Richardson had been searching for a home for his grandmother’s jewellery box and his grandfather’s medal, both connected to World War One. One of my first questions when people want  to donate something is, what is the connection to Tyneside? In this case Emily and George Armstrong Burns were both from Winlaton in Gateshead.

My second request is usually for more information about the story behind the objects. George Armstrong Burns, Mr Richardson’s grandfather, had this medal presented to him by the village of Winlaton as a token of gratitude for services rendered in the ‘European War 1914-1919’. 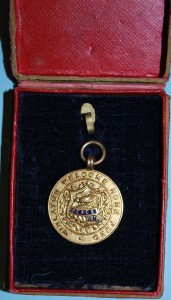 He had served in the Royal Navy Air Service, Balloon Corps during World War One and was then transferred to the Royal Air Force in 1917. He served in France until 1919. 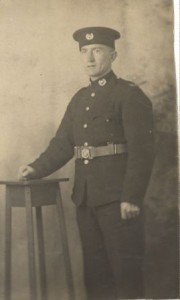 The jewellery box was given to Emily Burns, Mr Richardson’s grandmother, by the inmates of Groningen Internment Camp. 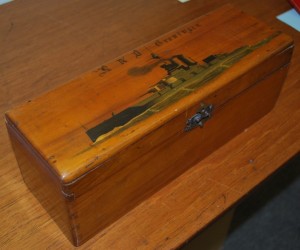 It was given as a token of their gratitude for the parcels of basic provisions that she, and other young women of the village, had sent them.  Emily’s step-brother, John (Jack) Pattinson, was interned there in October 1914. 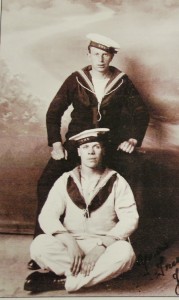 He was in the First Royal Naval Brigade which was deployed to assist the Belgian army. The Brigade were forced to retreat and rather than being taken prisoner by the Germans they crossed into Holland.  Holland was, during the War, designated as a neutral country therefore any military personnel entering the country had to be interned for the duration of the conflict.  You can find out more information here www.wereldoorlog1418.nl/englishcamp/

With a strong local connection and such engaging stories behind the objects I said that we would love to accept the donation of these objects into the collection, especially since we are planning to mark the centenary of the start of World War One in 2014 at the museum. I mentioned on the phone that it would be great if we could have some photos of Mr Richardson’s grandparents to accompany the medal and the box. 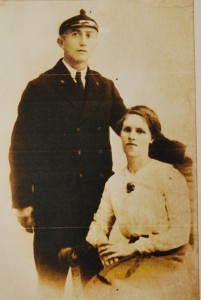 When we met today my expectations were exceeded. Not only did Mr Richardson bring in photographs but he also gave the museum a copy of a love letter that George had written to Emily in 1906. 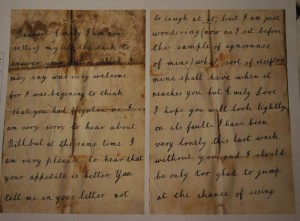 Love letter from George to Emily in 1906 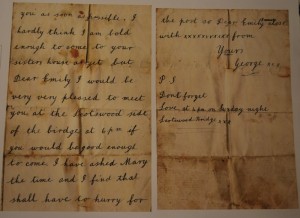 Reverse of love letter from George to Emily in 1906

George and Emily married in 1907 when Emily was 17. In the 1920s they moved to Yorkshire and in the 1930s they moved once again this time to Slough. Mr Richardson told me that he and his mother had lived with his grandparents for some time and that he can still remember them getting ready in their best dress on Sundays for their regular walk. Emily helping George with his collar pin and both singing to Chopin’s ‘So deep is the night’. ‘They were still in love at the end’ he told me. 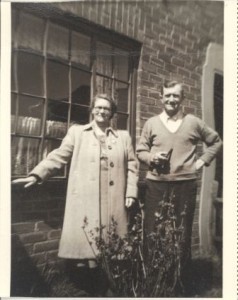 I feel very grateful that Mr Richardson has chosen not only donate these two sentimentally valuable objects to the museum, but that he also shared with us his grandparent’s story – it really made my day.  In return he said he felt happy that his grandparent’s history had returned home to Tyneside. 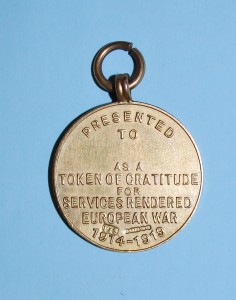