Discovery Museum   Social History
Posted by administrator on May 1, 2014     Permalink     Leave a comment 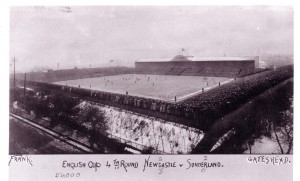 St James Park is something that runs very deeply among the people of Newcastle, and has arguably been adopted like a landmark such as the Tyne Bridg eand Greys monument. Today, we know it as the huge all-seater stadium with 52,000 Toon Army fans cheering on the likes of Shearer, Keegan and Jackie Milburn. However, St James Park has come a very long way from what we know it as today.

The city of Newcastle Upon Tyne was actually built on a series of small hills, and St James Park was actually built on one of these hills as part of the city’s Town Moor which was owned by the City Council and Freemen this made it hard for St James to be developed. In fact, prior to the first football match being played at St James, the site was actually used for public hangings, which is where the name of the Gallowgate originated from. In its early inception, St James became the home of four clubs which were Newcastle Rangers (1880 – 1882), Newcastle West End (1886 – 1892), Newcastle East End (1892) and Newcastle Wednesday (1890 – 1895). During the summer of 1886,West End’s supporters decided to build a 8 foot height fence creating a somewhat border from the rest of Castle Leazes and was the blueprint of St James Park in what we know it as today.

The first Newcastle United game played at St James was in 1892 following the merger of West End and East End, in order to create a stronger Newcastle football team to compete with the best teams in the country. The early success during the 1900’s now attracted huge crowds and a supposed 70,000 tried to gain entry to the game. However, although Newcastle United was now attracting huge crowds, and their development as a football team was recognised when the FA decided to stage an England versus Wales fixture at St James Park. However, although huge crowds were pouring in to watch Newcastle, there were still difficulties in further expanding the stadium. Archibald Leitch in 1926, drew up plans to completely cover the ground with seating at a higher level and terracing in front, however, the proposal saw the club conflicting with the corporation and the local residents of Leazes Terrace who opposed any potential expansion, therefore, putting the development of St James Park very much on hold.

Compared to the football stadia around Britain, which had seen many clubs up and down the country, redevelop their stadiums to fit in with the modern times; St James Park had remained largely unaltered. However, the fifties saw the introduction of floodlights around most top ground and St James Park was actually the third First Division ground to play under floodlights. However, there were many problems with the floodlights at St James, as the telegraph poles were too low which created many gaps and shadows, and it was argued that many supposed fouls occurred because of the bad lighting. 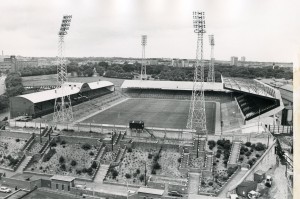 Throughout 1924 to 1985, football clubs did very little in ensuring safety for fans and overcrowding was always a common theme. In the 1980’s two stadium tragedies changed the outlook on health and safety in stadiums. The Valley Parade fire meant the West Stand at St James was to be demolished and reconstructed because wooden stands were now seen as being too dangerous to host a football match, while the Hillsborough disaster ensured that teams in the top two divisions, with a capacity of over 20,00 had to meet with the all-seater regulation.

Perhaps the most significant figure to the development of St James Park came when Sir John Hall completed a takeover of the club in 1992 in what was the starting point of St James Park in what we know it as today. The first proposals saw the extension of the Milburn Stand, while the stands behind the goals would reach 11,000, the development also saw a new pitch and drainage system installed with an underground heating system costing 400,000. The development in the stadium made St James an ideal stadium to host matches during Euro 1996. However, although these developments were impressive, the capacity of 37,000 was far too low, as there was a waiting list of nearly 20,000 for season tickets.

The demand for Newcastle United season tickets had proved problematic and there were proposals of Newcastle moving stadiums into Castle Leazes into a more rural area, which proved controversial among the fans, but seemed more practical as the extension of St James Park was restricted. However, with Hall now in retirement, new Chairman Freddy Shepherd decided against the proposed move and set out to redevelop the Milburn and Leazes stand with two immense double tiers, expanding the stadiums capacity to 52,000, in what we know St James Park of today. It has been estimated that more than £70 million had been invested over a ten-year period during the 1990s, while they were around 46,500 season ticket holders and still a waiting list. 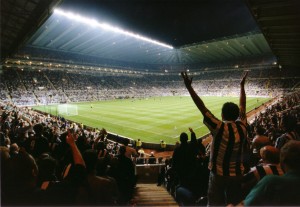 The development of St James Park has been an astonishing process, creating this phenomenal 52,000 capacity top of the art stadium, making it the then third biggest club stadium after Old Trafford and Parkhead.