I work at the Great North Museum: Hancock and for the most part of my job I look after the live animals at the museum. I have worked at the museum for 8 years and I have looked after a wide variety of animals from tarantulas to an American alligator called “Daisy”!

One of my favourite animals at the museum is one that isn’t actually on display at the moment. It’s a green tree python. It isn’t on display because it is still a baby and is too small to go in the tank we have for it. It is supposed to live in the large tank in the Living Planet gallery that is currently home to the Jungle Carpet Python. It’s a huge tank and the baby snake would just hide all the time if we put it in there now.

It’s my favourite animal because it is a very unusual snake. It was very important that we purchased a captive bred tree python as they are endangered in the wild, and wild caught snakes are generally prone to disease. Adult Tree pythons can be bought in this country but there is no guarantee that they are captive bred, and they are quite expensive. We bought ours in August 2008 from a breeder in Middlesbrough. It was tiny, like a little yellow worm with brown flecks. I busied myself making sure its new tank (which I had at my house) was clean and had plenty of places for the little snake to hide. It fed on tiny baby mice – one a week. I wanted to keep the snake at my house so I could keep a close eye on it 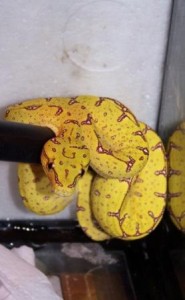 These baby snakes come in a range of colours from bright yellow, to brick red. They change colour to the green adult over two years. We think this colour change is to do with camouflage. The adult lays the eggs in undergrowth and when they hatch the baby snakes blend into their surroundings. The young adult snakes make their way into the canopy with their green/yellow colouration which camouflages them against their leafy background.

So I watched the baby snake change colour over the past 2 years, to the now green/ yellow adult colours. The snake now lives behind the scenes at the museum as I am happy with its progress. 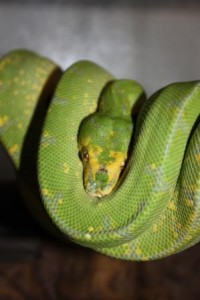 This type of snake is tropical and comes from rainforest regions of Indonesia. As a result they need very humid conditions. So I spray the tank and snake everyday. This kind of environment can promote bacteria so it is necessary to clean the tank regularly using a small amount of reptile disinfectant. The snake also needs a lot of heat. I use an infrared heat source from outside of the tank which is maintained at a temperature of about 26- 28 ˚C by a dimmer thermostat.  The snake is now eating 2 small mice per week. It is a bit of a tricky snake to feed as it is rare that it will pounce on its food. I generally have to put the mouse next to its nose and apply a small amount of pressure. The snake then opens its mouth to take the mouse. 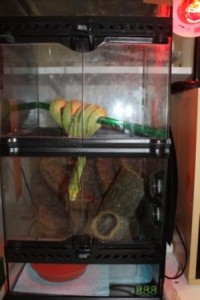 It is important that the snakes have a perch to hang off. They have very sensitive skin and prefer a perch rather than sitting on the base of the tank like other pythons. Also, these are generally not handling snakes because they are so sensitive, and it is best to let them be for the most part.

There are people who breed Green Tree Pythons with the aim of producing different colour strains. This is a time consuming process considering that you don’t know what colour you will ultimately get as an adult for at least 2 years. The colours vary from bright green to blue and yellow. For more information on how to care for these specialised snakes I recommend you refer to “The More Complete Chondro” by Greg Maxwell and refer to websites such as http://www.greentreepythons.co.uk 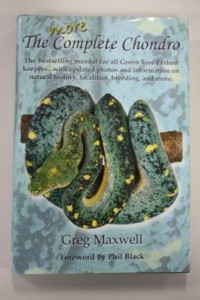