‘Culture in an Industrial Region’

Well there have been many changes to my role since I last wrote a blog post for the Shipley Art Gallery; I now have a job as Keeper of Art and work on projects across the three art galleries at TWAM- the Laing, Shipley and Hatton. It’s a really interesting role and much of my time is spent working on exhibitions, programming and general support all round!

But of course an important part of any keeper’s job is the collections! Tyne & Wear Archives & Museums has recently teamed up with researchers at Northumbria University to encourage new thinking and comment around important subjects. I have been asked, along with colleagues, to write a blog post about an item from the collections as part of a weekly programme to stimulate debate about issues that are important to us all, such as Britishness, migration and culture in an industrial region.

Each week, for four weeks, we’ll be blogging about a museum object and posing a question for you to respond to.  Please help us get the discussion going by adding your comments below, whatever comes to mind.  Staff from the university and from TWAM will then lead a live debate on the most hotly contested issues so watch this space!

So, the theme for my post is “Culture in an Industrial Region”. I have chosen a group of objects we had photographed this week to provoke some discussion:- 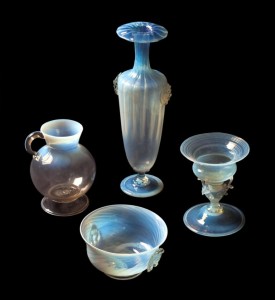 From the 17th century, glassmaking was an important industry on the Tyne. It did have it’s ups and downs; much like our economy today…. But in the 19th century a number of companies were established on the south side of the river and amongst those was Sowerbys.

In 1852 Sowerby’s Ellison Glass Works opened in Gateshead. John Sowerby is said to have arranged for 50 skilled glassmakers and their families to move from Birmingham to Gateshead, travelling on a specially chartered train!

Sowerby’s also recognised the skills of Italian craftsmen, and of course those well-known glassblowers in Venice. During the second half of the 19th century they employed a number of Italian glassblowers at the Gateshead factory, and this exquisite group of glassware is a good example of their work.

By 1865 the firm employed over 450 people and was considered to be the largest pressed-glass factory in the country. It forms an important part of our industrial heritage.

Production at Sowerby’s continued until 1972, with glass exported throughout the world including the USA and China. The glass items produced by the factory are recognizable as widely available, attractive domestic ware available to the wider public. As the Pottery Gazette wrote, commenting on Sowerby’s exhibits at an exhibition in South Kensington all the way back in 1884; ‘fancy glass should have been in the art gallery, but being of such a cheap and popular character, we suppose they were inadmissable; still, in taste and artistic treatment they rank as art goods… We may call it art for the million!’.

So, ‘art for the million’ was produced in large quantities on Tyneside in the 19th and 20th century, partly thanks to the skills of glassworkers from elsewhere in the UK and from Italy.

What do you think about this? Do you think diversity in our communities is a natural result of industrialisation? What effect does this have on our region today?

Also, should art be available to all? Is this important to the pride of people living in an industrial region? Or do you think art should be made in small quantities and expensively sold?

Looking forward to hearing your views!

One Response to ‘Culture in an Industrial Region’