Crime and punishment in North Shields

Back in November 2010 Tyne & Wear Archives was given a photograph album  of prisoners brought before the North Shields Police Court between 1902 and 1916 (TWAM ref. DX1388/1). The album contains over a thousand mugshots of prisoners and several years ago we put a small selection of these on Flickr. There are separate sets for the male prisoners and the female prisoners.

Over the last few weeks I’ve been adding to these Flickr sets and I thought this would be a good opportunity to find out more about the stories behind the photos. This was partly inspired by a gallery curated by Brenda Anderson using the first images uploaded to Flickr.

The mugshots include quite a few of children. These can really tug at the heartstrings and include images of two children, David Lloyd (aged 15) and George Burn (aged 14), who were arrested on 10 November 1902 for larceny. 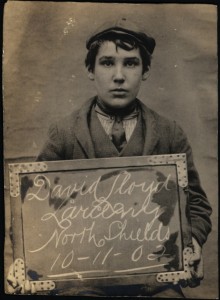 The Shields Daily News for that day reveals that they were charged with “stealing on the 8th inst. from a wash-house in Prudhoe Street brushes and a box worth 3s, the property of Peter Johnson”. The Shields Daily News for 17 November 1902 reveals that the boys pleaded guilty and their parents were bound over in the sum of £5 for their good behaviour during the following 6 months.

While these images of child prisoners really caught my attention, there was another case featured in the album, which had the same effect for completely different reasons. Rather than generating sympathy for the prisoner, this mugshot sent a shiver down my spine. There was something menacing about the prisoner’s appearance and the word ‘Murder’ on the board he was holding didn’t help matters either. 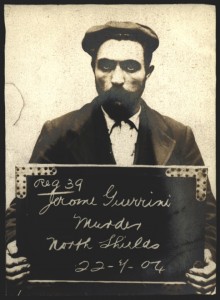 The case would have been featured in countless newspapers around the country but I was able to find a particularly good account by searching the British Newspapers collection on the findmypast website. The account appeared in the Morpeth Herald for 26 November 1904 and it revealed that the prisoner Jerome Guerrini (who also went under the alias of Joseph Brunetti) was a 27 year old Corsican who had spent the previous four years at sea as a fireman. The man he was accused of murdering was a labourer, Patrick Gilligan. Gilligan lived in Clive Street, North Shields (with two brothers named Davis), almost directly opposite the lodgings occupied by Guerrini.

“About 11 o’clock of the night of July 4th a noise was heard at the back of No. 10 Clive Street. One of the brothers Davis went out and saw the deceased, the prisoner and a friend of the latter named Petro Arteche. He heard the deceased man tell the prisoner and his companion to shift, as it was no place for them to commit a nuisance. Davis would tell then that he saw the prisoner strike the deceased in the chest. Davis told the deceased to come into the house which he did.

Gillighan sat down to supper and just at that moment a noise was heard at the shop door in the front street. Wm Davis opened the door, but saw no one. The deceased also appeared to have come to the door, spoken to someone in the street, and proceeded immediately down an adjoining passage. While he was going down a noise was heard at the back door. Davis followed him down the passage and saw him with head of prisoner’s friend, Arteche under his right arm, and was striking him. The deceased also struck at the prisoner on the right side of the head, causing it to bleed. Then it appeared that the prisoner retired a few yards, rushed at the deceased and struck him on the left side. Davis saw no knife but a few seconds afterwards he was attacked by prisoner. Davis avoided a blow and when the prisoner raised his hand he saw he had a knife. Deceased staggered forward and fell. Davis went to help him up the passage and while he was going Gillighan said ‘Willie, I am stabbed’.” Gillighan died shortly afterwards of internal bleeding.

During the trial Guerrini’s solicitor, Mr Mitchell-Innes asked the jury to find a verdict of manslaughter, emphasising that he was not the aggressor and only used his knife in the heat of the moment. He pointed to Gillinghan’s conviction four years earlier for a serious assault on another man with a bottle and a knife. Caroline Evans, a married woman living in Clive Street, also testified that she saw Gillighan “seize the prisoner and drag him across the back lane”. She heard Guerrini say “I am not making a noise, I don’t want to fight”. 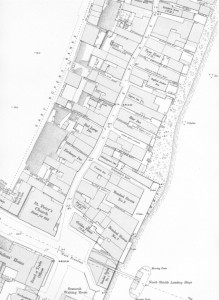 This Ordnance Survey map published in the late 1890s shows that there were quite a few inns and public houses on or just off Clive Street. Could alcohol have played some part in this terrible incident? Did Gillighan single out Guerrini because he was a foreigner?

The Judge’s summing up is interesting in the rather casual way that it stereotypes Corsicans. The Morpeth Herald reports that:

“Judge Darling, in his summing up, said that if there was anything that distinguished a Corsican from the native of any other country, it was the hotness of his blood and the constant use of the knife. He thought the jury should observe this fact in the case. The jury found prisoner guilty of manslaughter and he was sentenced to fifteen years penal servitude”.

I have to admit that I can’t help feeling a bit sorry for Guerrini. There doesn’t seem to have been anything premeditated about his involvement in the dispute – if anything Gillighan seems to have incited it. The fact that it got so out of hand, with such tragic consequences, is a warning of the dangers of carrying a knife. Perhaps not surprisingly a quick search of the 1911 Census shows Jerome Guerrini was still serving his sentence six years later at Parkhurst Prison on the Isle of Wight.

By bringing together information from different sources, in this case a photograph album and local newspapers, it’s possible to bring some fascinating, if tragic, stories to life. To my mind the mugshot album is particularly interesting because it relates to a port town. It gives us an insight into the lives of both locals and transient visitors such as Jerome Guerrini. There are plenty more stories waiting to be uncovered and I hope to highlight more mugshots from the album in future blogs. In the meantime why not take a look through this remarkable slice of Edwardian social history on our Flickr pages.

8 Responses to Crime and punishment in North Shields