Following the positive feedback received at the first session, Jess, Lillian and I approached the second session of Creative Baby! with great excitement.

This session would focus on ‘Domesticity: an exhibition of interiors by Naomi Alexander’. I had already developed various ways of engaging young children in this exhibition which you can read about here. However, it was not as overtly child-friendly as ‘Blooming Marvellous’, so creating a tour for babies would be a bit more of a challenge.

I identified two main themes in Naomi Alexander’s paintings, which I felt would be particularly fruitful for this session; these were the kitchen themes of the paintings, Naomi’s technique of including a mirror in the scene which shows us her reflection; and the artist’s love of sketching. I also wanted to invite parents and babies to ‘step inside the paintings’, to help them connect with the artworks. As a result, the tour included using mirrors to look at the paintings; a colourful reading area, inspired by paintings of books and a rainbow striped rug; sketching on large rolls of paper on the gallery floor; kitchen roleplay; and the accompaniment of piano music inspired by the painting of the artist’s sister playing the piano. 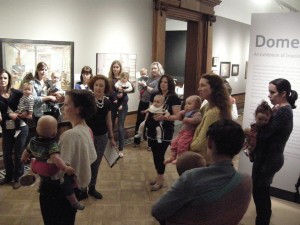 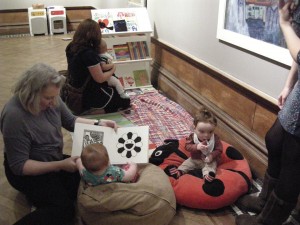 Reading on the colourful rug – a scene inspired by the paintings 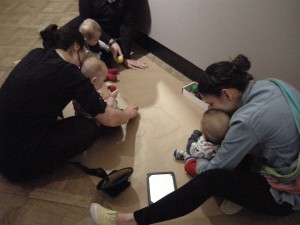 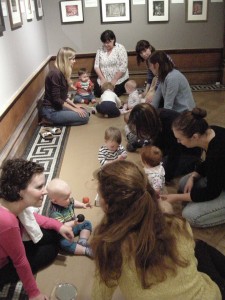 Drawing in the Naomi Alexander exhibition

Next it was time for some parachute games and songs, all themed around the kitchen and mirrors, to continue the exhibition experience for the babies. We introduced some musical instruments and sat on a mirrored floor, making the colourful fabric even more mesmerising to the babies! We were delighted that a group of mums returned to the parachute later in the session to do their own games and songs and expand their babies’ gallery experiences. 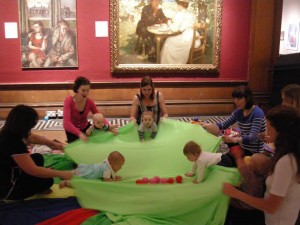 Mums introducing their own games and songs to the session.

This session’s sensory play space was also themed around the kitchens and mirrors found in the paintings. Vast rolls of mirrored foil covered the floor, and metallic foil offered enticing scrunchy sounds. The mirrors reflected the light beautifully, introducing another sensation. Lively Jewish music from around the world played, providing a link to Naomi’s paintings of local Jewish family homes. A crafting activity also offered the opportunity to create a Discovery Bottle to continue the creativity at home. 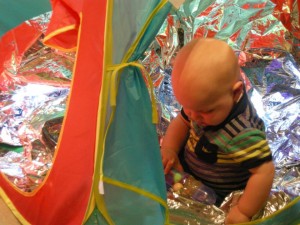 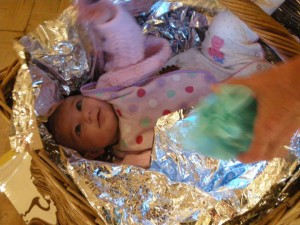 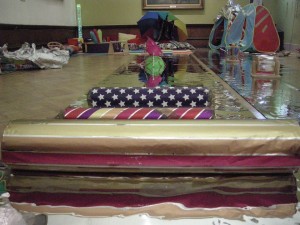 It was delightful to see how equipment from the previous session provoked completely different play when set up in new ways; the egg shaped coloured lights had been set up in a tent at the last session, but on top of the mirrored floor they could be pushed and rocked by the babies, which was a lovely surprise for everyone!

Another big difference was the babies themselves – of those who’d attended the previous session, many had hit important milestones such as grasping, crawling, and emotional development, which meant new ways of exploring and playing.

This video shows you some of the fun we had at the session! And the photos are sure to make you smile! 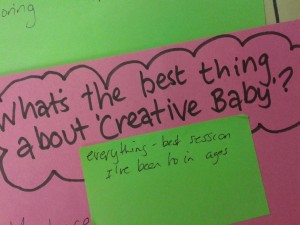 Feedback from the session