Can looking closely at paintings and some of an artist’s archival material improve a primary pupil’s written response to a subject? By Julie Ballands, Assistant Learning Officer, Laing Art Gallery

This was the enquiry we explored at the Laing Art Gallery. We focussed on Paul Nash’s WWI paintings, depicting scenes from the front line, and engaged local writer James Whitman to work with the Year 5 classes from three local primary schools: Carville Primary School in Wallsend; Walkergate Primary School; and Hotspur Primary School in Newcastle.

As part of the project, we transcribed letters held by Tate Archive written by Paul Nash to his wife and used these to help inform themes for the project. Paul Nash had initially signed up and served on the Western Front as a soldier, but after a period back at home injured, he returned to France as an official war artist. This time around he was able to stay in safer officer class surroundings further back from the front line. During his time away from the war, his former colleagues had all been killed and this deeply affected him and his views on the war. Coupled with being a landscape artist who was very in tune with his surroundings, he found the contrast of the ‘before and after’ landscapes in France hard to come to terms with.

The lovely weather of the last few days has been even harder to bear. We have been outdoors a good deal suddenly and Sunday I spent making drawings in the country here which is really attractive when one has time to explore. About the bunk cellandines are gleaming, I have found wild periwinkles in the copse and today a fat buds of the king cups were bursting in the Marshes near the railway. The birds everywhere make the country just like ‘real’ spring… We live carelessly enough here, but even the least emotional of men is moved at the beauty of these days and sighs from the bottom of his heart to hear the guns a few miles away.

I have just returned last night from a visit to Brigade H.Q. up the line and I shall not forget it as long as I live. I have seen the most frightful nightmare of a country ever conceived by Dante or Poe – unspeakable, utterly indescribable. In the 15 drawings I made I may give you some vague idea of its horror, but only by being in it and of it can only make you sense of its dreadful nature and what men in France have to face…… Sunset and sunrise are blasphemous mockeries to man.  Only the black rain out of the bruised and swollen clouds on this the bitter black of night is fit atmosphere in such a land. The rain drives on, the stinking mud becomes more evil yellow, the shell holes fill up with green white water, the roads and tracks are covered in inches of slime, the black dying trees ooze and sweat and the shells never cease. This is where I plunge overhead tearing away. The rotting tree stumps breaking the plank roads, striking down horses and mules, annihilating, maiming, maddening, they plunge into the grave, and cast up on it the poor dead. It is unspeakable, godless, hopeless.

Our writer James Whitman took these themes and, along with studying Paul Nash’s WW1 paintings, devised schools workshops focussing on:

The approach to working with each school was slightly different, depending on the number of Year 5 classes in the school and how long they were able to spend on a visit to the gallery. This gave us the opportunity to tweak and try out slightly different activities. Each class spent at least half a day at the Laing in the Paul Nash exhibition and in our learning spaces. 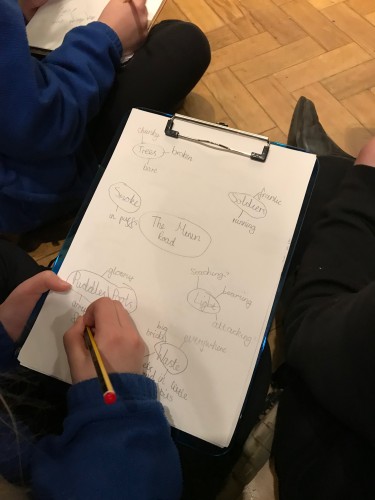 In the gallery, the paintings were used as a stimulus to help increase the children’s vocabulary and generate creative content to enhance their poetic writing. The children were asked to sit in front of a painting and create spidergrams in response to them, working into groups of words and expanding on them (see photo to the left). It seemed that this did increase the depth of the adjectives the children were using to describe the war-torn landscapes and the imagined experiences of the people in it. It was also apparent that some children preferred to draw a sketch first and then annotate it and that this seemed to help them to better articulate their written work.

The children then got a chance to create lines of poetry from words they had written in the gallery. These were either brought together a line at a time as whole class poems, or were written into an individual poetry zine.

In the in-school sessions, the children worked with the concept of genius loci – the spirit of a place. They were led through a process of re-imagining places experiencing change as characters – drawing them initially and then writing about them. 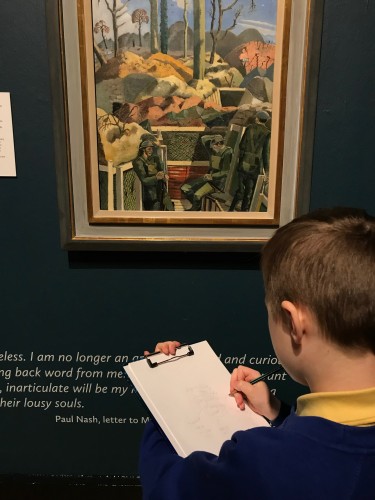 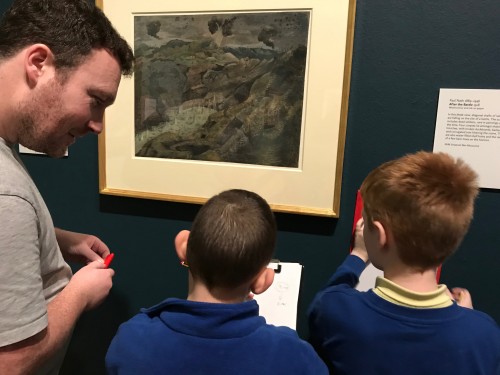 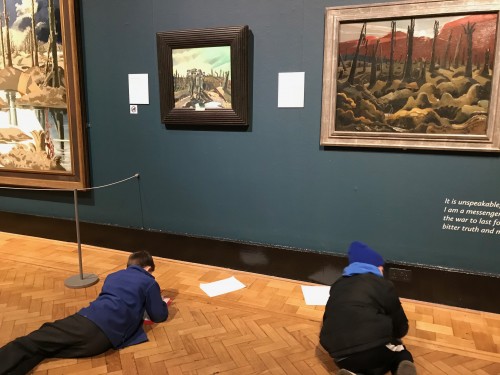 A wall between peace and destruction
White smoke trails and one black flourish
Metal bits of plane litter the sea.

Trees with no leaves rot in the ground
The dead linger behind,
Their crashed green planes with broken wings 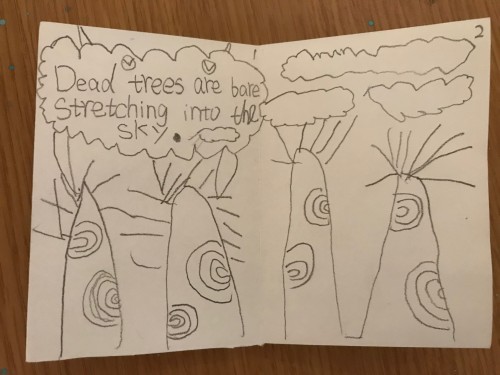 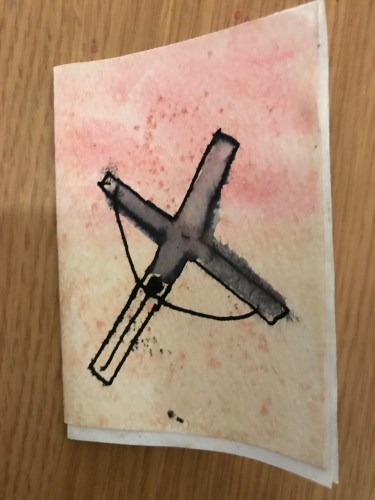 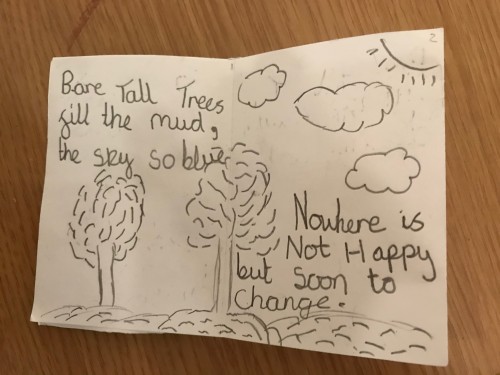 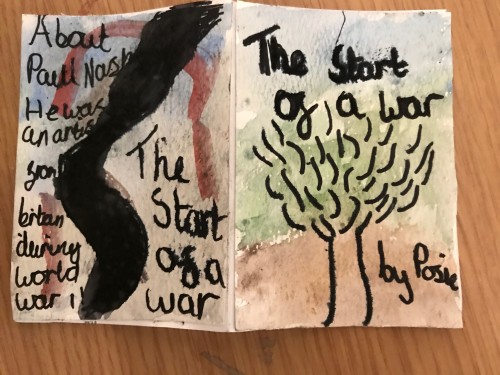 The three participating schools all gathered at the Laing for a final event where they read their poems in front of the Paul Nash paintings that inspired them and got the chance to hear each other’s work. Sarah Richardson, the exhibition’s curator was there to present each class with books about The Laing Art Gallery to take back to their schools.

Visual literacy and literacy are very much linked. They can both be concerned with telling stories and creating mood. Initial observations from the project would suggest that using the visual stimulus of the Paul Nash paintings increased the vocabulary of the children when writing in about life on the frontline during WWI.

Thanks to The Heritage Lottery Fund, funded by National Lottery players, our learning team were able to work with a writer and the fantastic Paul Nash exhibition to complete this work. Lottery funding also enabled these local school children to learn more about the effects of the First World War.