Over the past six months I’ve been popping into the local studies libraries in North Shields and South Shields to look through local newspapers from the early Twentieth Century. The reason for this has been my fascination with one particular document in the Tyne & Wear Archives collection – a photograph album of prisoners brought before the North Shields Police Court between 1902 and 1916 (TWAM ref. DX1388/1).

The album contains over a thousand mugshots of prisoners and you can currently browse over 150 of these on our Flickr pages, where they are divided into four separate sets relating to the male prisoners, the female prisoners, First World War criminals and children. While the images themselves are amazing, what the album lacks is the background information about the prisoners and their crimes. The obvious way to find that information was to look through the local newspapers.

Carrying out this research has been extremely rewarding. It’s enabled me to really bring these mugshots to life and has unearthed some very interesting stories. By far the most common crime committed by the prisoners was larceny (or theft as it’s better known these days). The mugshots include numerous ‘career criminals’; however, some of the prisoners don’t seem to have been particularly careful in selecting their victims. One such case is that of William Johnson (29) a labourer from Leeds who also went under the alias Thomas Wilson. 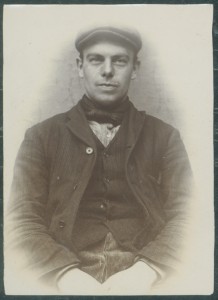 The Shields Daily Gazette for 1 May 1905 reported:

“On Saturday night a man named Wm. Johnson, performed the unusual feat of breaking into a policeman’s dwelling-house. The officer in question, Sergeant George Scougal, of the Tynemouth police force, resides in Kielder Terrace, Military Road, North Shields. Next door to him, fortunately, lives another member of the same force, namely, PC Alexander Whitehead.

On Saturday night, about half-past nine, Scougal was out on duty, and there was for a while nobody in charge of the house. Mrs Whitehead, the next-door neighbour, had her attention attracted by hearing the Scougals’ little dog making a great noise and listening closer, she heard the sound of strange footsteps in the house. She at once informed her husband and the PC, after assuring himself that there was really a stranger in the sergeant’s house, hastily sent for his brother, George Whitehead, who lives in the same neighbourhood, and together they captured the housebreaker as he left the premises by the back door. Johnson was not disposed to take his capture ‘lying down’ and a bit of a sharp tussle took place, but in the hands of two wiry men he was obliged to submit and was borne away to the police station, where on being searched some gold and silver coins and other articles were found in his possession.”

Bizarrely the other articles belonging to Sergeant Scougal, stolen by Johnson, included a pair of drawers (underpants, not furniture). After pleading guilty at North Shields Magistrates Court the prisoner was committed for trial at the Quarter Sessions. He was given a six months sentence for this crime to be served concurrently with another six month term for an earlier burglary in Wallsend. Curiously, the Quarter Sessions report in the Morpeth Herald of 1 July 1905 refers to him as William Phusor, a 23 year old bricklayer, casting doubt on his true identity.

He wasn’t the only criminal looking to profit from pants. My investigation into the mugshot for John Ferguson, a 27 year old cartman from Berwick, revealed that on 14 May 1906 (under his alias Robert Wilson) he was charged with stealing four pairs of men’s drawers, valued at 6s, from the shop door of the Cash Clothing Company, Saville Street West. 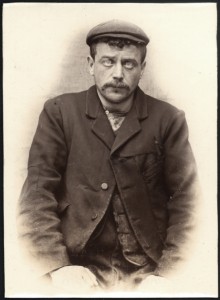 Ferguson had a number of previous convictions and these seem to have been held against him since he was sent to prison for three months for what was a fairly minor crime. Ferguson also went under a third name, Martin Farrell, and his use of two aliases probably didn’t help his image in court.

The cases I’ve investigated so far also include several cases of break-ins to sweet shops. One of the cases involved a 20-year-old Newcastle labourer, John William Atkinson who broke into not one but two confectioners on 28 July 1904. 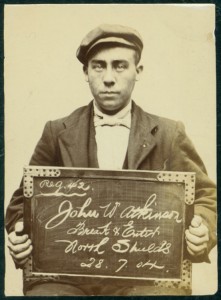 The Shields Daily Gazette for 4 August 1904 reports that Atkinson was:

The evidence for the prosecution was to the effect that the prisoner had in both cases effected an entrance through the fanlights above the doors, ransacked the shops and filled his pockets with the articles mentioned in the charge. After leaving his second shop he stood awhile in the Grand Parade where he was seen by PC Telford, whose suspicions were at once aroused”.

What followed was a long chase over the sands reminiscent of a scene from the film ‘Get Carter’. The Shields Daily News continues:

“As soon as the prisoner caught sight of the constable he bolted over the sea-banks and along the sands, the policeman in hot pursuit. He sought cover among the bathing machines but was chased out of his hiding place and made another run for liberty. Telford doggedly followed his man and eventually ran him to earth at the south end of the beach. Searching him he found the young man’s pockets full of sweetmeats, which he admitted having got from the refreshment house. At the Police Station he found the rest of the rest of the articles in the prisoner’s possession”.

Atkinson was committed for trial at the Quarter Sessions where he was sentenced to two months in gaol. Maynard’s seem to have been quite unlucky because they suffered another attempted break-in a year later on 26 July 1905, this time at the hands of William Buckham, a 20 year old of no-fixed abode. 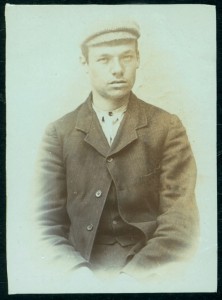 Buckham received a 12 month custodial sentence for this and another break-in at East Howdon several days earlier where he escaped with “a quantity of cigars and cigarettes, a tin of sardines and a tin of salmon valued at £1 10s” (Shields Daily News, 19 September 1905).

By combining the mugshots and the newspaper reports we can get a real insight into the Tyneside underworld of the early 1900s. These stories, while sad, reveal so much about the Edwardian period and I hope to be able to share some more with you in the near future. In the meantime why not visit our Flickr pages and take a look at the mugshots as well as a whole range of other remarkable images from our collections.