2014 will mark the 100th anniversary of the beginning of the First World War, a four-year international conflict that marked the lives of people from every nation. This is a subject you will be hearing a lot about over the next year as we build up in the UK to commemorating the anniversary. Museums and galleries will not be slow in developing programmes around the commemoration; indeed TWAM has a number of projects already underway.

The collections in our museums and galleries relating to this conflict are small in number but large in significance. One example is this painting from the collection at the Laing Art Gallery: 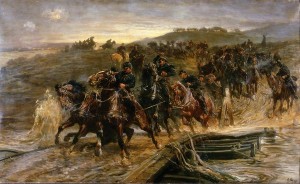 During the First World War, the British Government (specifically the Ministry of Information) realised they needed a powerful and immediate way of communicating news from the Front- and indeed their overall message about the war- to the public at home. Artists were commissioned from 1915 to record the battlefields in person. The results, as would be expected from the variety of artists eventually commissioned, were a mixed range including topographical, futurist and traditional perspectives on the events witnessed. This work is an excellent example of a more traditional, historic battle scene.

The range of artistic responses to the First World War mirror, of course, the huge diversity of political and societal responses to the conflict. Some believed the war to be vital, some that it was unnecessarily prolonged, others that it should never have started at all. This list is in itself a very simplified version of the range of views!

So we should perhaps not be surprised that now, as the anniversary approaches, there are competing and dissenting voices on how, as a country, we should observe and commemorate. The government has announced a £50 million fund for key events to mark the anniversary. David Cameron said:

‘Our ambition is a truly national commemoration worthy of this historic centenary.’

‘A commemoration that captures our national spirit in every corner of the country, from our schools and workplaces, to our town halls and local communities.

‘A commemoration that, like the diamond jubilee celebrations this year, says something about who we are as a people. Remembrance must be the hallmark of our commemorations.’

On the other hand, this has not been received well elsewhere, as a letter to the Guardian (extracts below- go to http://bit.ly/13FLb4c for full letter) from a number of public figures on 21 May demonstrated:

‘Next year marks the 100th anniversary of the beginning of the first world war. Far from being a “war to end all wars” or a “victory for democracy”, this was a military disaster and a human catastrophe.

We are disturbed, therefore, that David Cameron plans to spend £55m on a “truly national commemoration” to mark this anniversary. Mr Cameron quite inappropriately compared these events to the “diamond jubilee celebrations” and stated that their aim will be to stress our “national spirit”. That they will be run at least in part by former generals and ex-defence secretaries reveals just how misconceived these plans are.’

Still more commentators believe the Government is doing too little, too late. They also argue that:

‘politicians and officials are focusing too much on British defeats and the carnage and futility of the war, because they are too anxious to avoid upsetting Germans and want to make sure the events are not considered triumphalist.

However…. by doing so, the Government is presenting only the modern, orthodox view of the conflict: that it was avoidable and unnecessary. It thus ignores arguments that, like the Second World War, it was a fight for survival.’

This blog is part of a partnership between Tyne & Wear Archives & Museums and Northumbria University to encourage new thinking and comment around important subjects.

Each week we’ll be blogging about a museum object and posing a question for you to respond to.  Please help us get the discussion going by adding your comments below, whatever comes to mind.  Staff from the university and from TWAM will then lead a live debate on the most hotly contested issues so watch this space!

In addition TWAM would like to know more about your thoughts on commemorating the First World War, which could inform our programmes for the next four years.

I look forward to your comments!

2 Responses to Britishness- A National Identity?