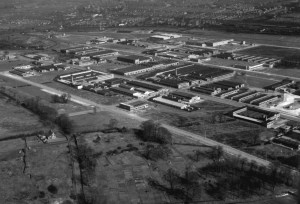 In 1943 Shaws were given a contract by the Red Cross to supply biscuits for food parcels to be sent to prisoners of war. During the Second World War the British Red Cross and the Order of St John (operating as the Joint War Organisation) were responsible for sending over 20 million food parcels. Each packet of biscuits included a packing slip to which some of the girls in the factory added their name, address and a message. Sadly the Archives doesn’t have any images of the factory but we do have this lovely shot taken during the same era for another local biscuit maker. 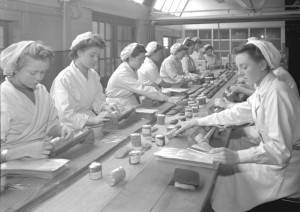 The notes clearly touched many of the prisoners who received them and some responded by sending a letter of thanks. Richard Nash, an Australian held at Stalag XVIIIA wrote “I am glad you like writing Elsie because mail to a POW is like meal to a hungry man” (TWAM ref. DX1571/1/6). Nash may have been more used to solitary confinement than most. He seems to have been a regular if unsuccessful escapee and at the time of his final letter to Elsie he was being punished for his last attempt;

“I am at present in the bunker doing time for trying to escape but I am getting quite used to it now as this is my fourth time for the same thing but they say keep trying ‘so OK'” (TWAM ref. DX1571/1/6). 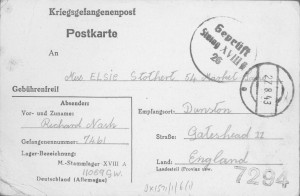 Many of the men who wrote back to Elsie asked for a photograph. It’s probably fair to say that after spending so much time surrounded by fellow prisoners and guards, the attention of a young woman was very welcome. Emile Campion, a Belgian hairdresser, who had already been a prisoner for 3 years explained:

Emile’s feelings were probably totally genuine, although he was clearly a bit of a charmer and may also have had other motives. Just after signing off with a kiss he added:

“PS Enclosed is a ticket for a parcel, if you would send me some cigarettes, it would give me great pleasure. Thanks in advance my blonde Elsie” (TWAM ref. DX1571/1/1).

Although loneliness and boredom were clearly felt by many of the prisoners there were exceptions. Charles Carle a soldier from Scotland wrote on 7 June 1944:

“We have just heard of the landing of troops in France so the lads are all in the best of spirits … There are thirty of the lads here working on different farms & we have plenty of amusements to pass the time away” (TWAM ref. DX1571/1/2).

The content of the letters is by and large fairly trivial but the thing that stands out to me is how much the notes from Elsie meant to the prisoners. The biscuits were well received but more than anything the prisoners appreciated contact with the outside world, to know that someone was thinking of them. It didn’t just give them a distraction; it must have also given them hope for the future.

It’s often said that ‘it’s not the gift, it’s the thought that counts’ and these letters reflect the truth of that. With Christmas nearly upon us it’s a useful reminder to me that a simple card or a humble box of biscuits can actually make a real difference to someone. They show you care.