Bob was born on 8 April 1944, unfortunately only seven months after his father was killed on active duty as a Pilot Warrant Officer in the RAF.

He attended South Shields Boy’s Grammar School, where he received school colours for Cricket. Bob went on to Leeds College of Art in the 1960s, and then came back to South Shields where he taught Art and Design at the Grammar school he’d attended as a boy.

Bob went on to lecture at the South Shields Marine and Technical College in Art, Design and Photography, and was appointed head of Photography.

Some of the photographs we would like to show you today are of the Hairdressing and Fashion departments of the College, taken by Bob in the 1970s/80s.

Here is a head and shoulders shot of a young woman, sporting an unforgettable hairstyle. 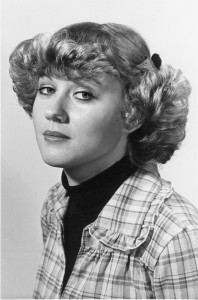 The photo below shows a very busy hairdressing department on what looks like a shampoo & set day. Were you one of the trainees on that day – Tracey Thompson, Julie Luther, Shani Falconer, Karen Wilde and Mary Baratpour. There is also a poster on the back wall congratulating ‘Karen and Wendy’. 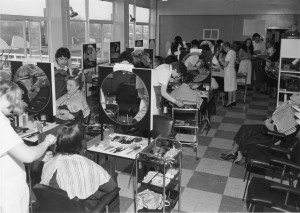 Here are some striking fashions, possibly made by the girls wearing them. The shoes in particular are not dissimilar to the fashions of today, being wedged, platformed and ankle-strapped. 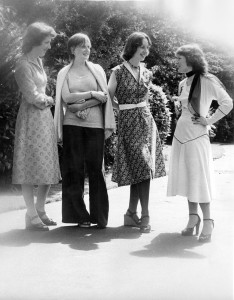 This colour photo, dating to the 1980s, shows six girls wearing outfits they have probably made themselves. The girl on the left wearing the hat looks rather like a Bananarama fan, whereas the girl seated in the red dress with black beads seems to have gone for a more classic style. The girl second from the right, in the red blouse, certainly knows how to strike a pose, unlike the poor girl next to her, whose creation has been hidden. 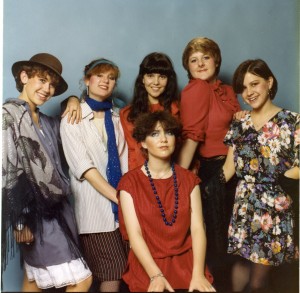 Bob took many photos of the various departments within the College including some he didn’t teach, but obviously had a photographic interest in. Next time we will show you some photos taken on a trip with the College students to see various London art galleries, taken in about the 1970s. Perhaps you were there?