I’m the senior manager responsible for Archives, where we generally work with historical documents on parchment or paper, sometimes hundreds of years old.

The most exciting recent development for the Archives, however, has been the opening of the BFI Mediatheque “a digital jukebox of film and TV programmes, giving us access to the British Film Institute’s extensive collections”. Click here for more details.

The first weeks of July were a scramble to get the room fitted out with new carpet, specially designed viewing booths, and computer screens in time for the grand opening on the 20th, but we managed it, and it was a great occasion in spite of being possibly the wettest evening of the year!

There was a real buzz as visitors saw the Mediatheque for the first time, after speeches from Amanda Nevill, Director of the BFI and Graeme Thompson, formerly of Tyne Tees Television and now of Sunderland University. People immediately started searching for their favourites – from TV programmes like Basil Brush and Monty Python to full length British films like The Wicker Man and 1984. 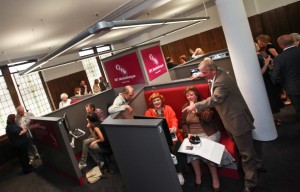 There was also a lot of interest in the local content from both the national and regional collections – the building of the Tyne Bridge, skipping grannies in Benton in the 1920s, competitive leek growing in Ashington, Durham Miners Gala and the Hoppings a hundred years ago. 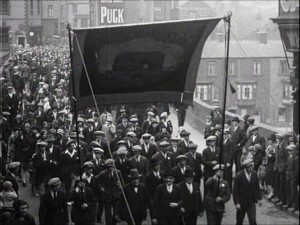 Durham Miners’ Gala 1910, just one of the early films in the Mediatheque

Since the opening we’ve seen a steady stream of viewers, but there’s still plenty of space at the moment so it’s a good chance to see what’s available before everybody hears about it.

One Response to BFI Mediatheque