As readers of murder mysteries well know, when a body is found in a large country house it’s usually the butler that did it. While this is just a crime fiction cliché, research that I recently carried out at North Shields Library suggests that wealthy Edwardians would’ve been well advised to keep a close eye on their servants.

Over the past couple of years I’ve been popping into the local studies library to look through old copies of the Shields Daily News. My purpose was to uncover the stories behind one of our most exciting documents – a photograph album of criminals brought before the North Shields Police Court between 1902 and 1916 (TWAM ref. DX1388/1). This album contains over a thousand mugshots and as I researched them a number of interesting themes began to emerge. One of these was the appearance of a distinctive group of people – young female domestic servants.

These girls usually stood out by their appearance – it was very noticeable that they were smartly dressed, wearing hats rather than shawls. Another common factor was their youth with all those identified so far aged between 16 and 19 years. Not surprisingly, perhaps, they were all arrested for stealing from their employers.

One of the saddest cases is that of Dora Agnes Stephenson, aged just 16 when she was arrested in January 1906. 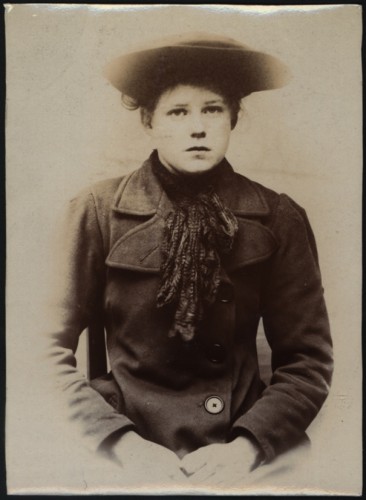 At North Shields Police Court on 30 January she pleaded guilty to stealing a brooch, a blouse and a cloth bag belonging to her employer Robert Wardhaugh of Chirton Hill Top Farm. Newspaper reports don’t give an explanation for the theft but it appears to have been out of character. A report in the Shields Daily News of 23 January reveals that she was so distressed by events that she “swallowed some embrocation … and the stomach pump had to be used”. Her family appears to have been supportive and her father was able to supply the magistrates with good character references from previous employers. As a result she was spared jail. Instead her father was bound over in a sum of £5 to bring his daughter back to court if required within the following twelve months.

This case is quite similar to a number of others, including that of Ethel Penman, a 19 year old domestic servant from Jarrow. 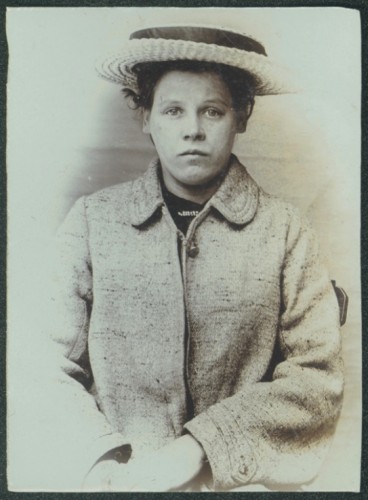 The Shields Daily News for 16 July 1906 reveals that she was charged with stealing a lady’s feather stole and a pair of leather straps, valued at 16s, from her employer, Margaret Hamilton of 18 Latimer Street, Tynemouth. The newspaper report of the court proceedings states:

“Formally charged, the accused said this was her first offence and it would be her last. The mother of the prisoner said her daughter had not been previously guilty of theft … Accused promised not to misbehave herself in future and upon this understanding the mother was bound over in the sum of £5 to bring her daughter up to receive judgement if called upon within six months”.

There seems to be a pattern of young domestic servants stealing clothes and jewellery from their employers. The temptations of being surrounded by these expensive possessions were just too great for some and perhaps their youthful inexperience gave them false hope that they would get away with it.

Our final case, relates to one of the most interesting mugshots in our collection. 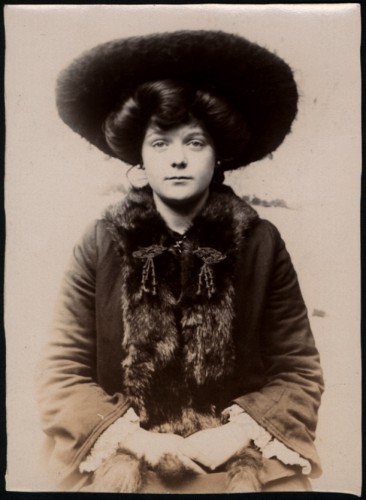 The girl in this picture is Maud Garmey, a 17 year old from Jarrow, who was working as a domestic servant at the Tyne Hotel in Clive Street, North Shields. She was arrested on 8 November 1905 for stealing three bed sheets, a pillow case and various other household articles valued at a total of £1 4s 2d. The Shields Daily News for 15 November 1905 reports:

“Jane Elizabeth Robson, a single woman, residing on the Ranter’s Bank, stated that on the 7th inst. the accused came to her house and asked to be taken in. She acceded to her request. Prisoner had with her a lot of things which witness afterwards handed over to the police. Inspector Thornton said he arrested prisoner and charged her with the theft.

She replied: “Yes, I took them”. Chief Constable Huish stated that he had had an interview with the relatives of the accused, who resided in Jarrow. They thought she should be sent to a home and with the assistance of the Police Court Missionary (Mr Macpherson), a home had been found for her. He asked the magistrates to deal with her under the First Offenders’ Act and bind her over to come up for judgement if called upon within twelve months on her promising to go into the home. Accused gave her consent and the magistrates bound her over.”

This case is slightly different from the others. The items stolen were household items – sheets, pillow cases and the like – rather than personal ones. Her expression is also rather different from that of Dora Stephenson or Edith Penman, who both give a sense of sadness at being arrested. Maud Garmey’s mugshot on the other hand is intriguing because she seems quite nonchalant and unaffected. It appears that her family were not as supportive as in the other two cases. Rather than taking care of her themselves they were trying to get her admitted to a ‘home’. It’s not absolutely clear what sort of home this was but it seems that her parents felt her behaviour was either an embarrassment or simply beyond their control.

I hope that further research will reveal more about the enigmatic Maud Garmey and the other criminals featured in our album of North Shields mugshots. Their stories tell us a lot about the Edwardian period and give us a fascinating insight into the lives of ordinary people as well as a glimpse into the murky Tyneside underworld. If you’d like to see more of our mugshots then why not take a look at our Flickr pages https://www.flickr.com/photos/twm_news/sets/, where you’ll find over 200 of them, together with a wide variety of other fascinating images.

One Response to Beware the servants