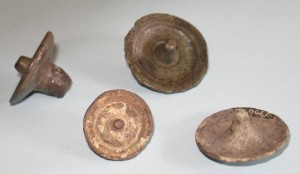 We have been busy changing the old Daily Life gallery in the museum at Arbeia into the brand new Amazing Finds gallery, which meant we had to take all the artefacts out of the room during the building work. Some of the objects have gone back out on display, but as we have also included new objects that have not been previously been on view before, others had have to go back into storage. Amongst these items are a selection of ‘bell-shaped’ studs; a circular copper alloy stud with a concave face and a central projection. They originally had an iron shank that rarely survives on the examples in our collection. They are known to have had several uses, such as the pommel of a dagger, the hinge of a sheath to protect the blade of a tool and as box fittings.

The excavations at Arbeia have produced 73 examples in all – one of the most common categories of copper alloy objects. This large number suggests they were probably mainly used as box fittings on the site, as each box would have used a number of them (for example, one excavated box from Hungaryhad 19 of them). Curiously, however, there are very few from Arbeia that match closely in design, as you would expect from sets used together – they vary in size, the height of the projection, the presence or absence of grooves on the skirt, and their number and position.