Behind the scenes in the stores of Tyne and Wear Archives 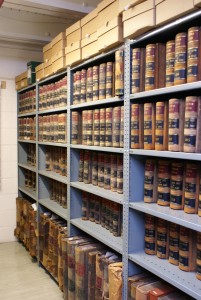 One of many bays containing volumes

It has been another busy day up in the Archives stores. We have 12 miles of shelving if you laid them end to end, and I think I’ve walked most of them. Every day that we are open to the public, request slips are sent up in the hoist (what was once a ‘dumb waiter’ for the Co-op directors’ dining room) and staff hurry off to find the items that visitors want to see, hopefully within 20 minutes or less. 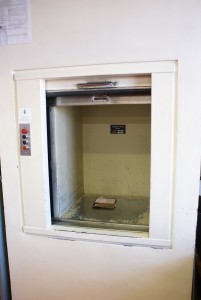 Only authorized personnel get to see the stores regularly – there are many confidential, sensitive and fragile records in the stores, but I thought I’d try to give a flavour of what it’s like to work in this ‘hidden world’ of ledgers, parchment and plans. 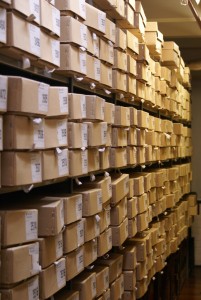 All of the Archives Services Assistants and Archives Conservators take turns fetching and carrying the unique and irreplaceable records that our visitors request. It can be surprisingly physically-demanding and dirty work. Hazards include handling gargantuan volumes which seem like something from a giant’s bookshelf, or red rot / red dust from leather bound items getting on your hands and clothes which make you look like you’ve been working on Mars all day. 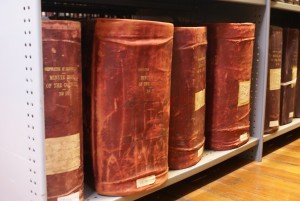 Yet phrases like ‘treasure trove’ or ‘Aladdin’s cave’ are certainly apt – we have records going as far back as 1183 and right up to the present day. Walking amongst the millions of items you can feel the ‘hand of history’ upon your shoulder, or should that be the ‘paper-weight of the past’? There’s a very strong physical presence and reminder of the memory of Tyne and Wear in these stores. 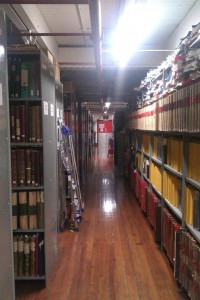 Just one of our stores

Some visitors to the stores have remarked it might be a bit ‘creepy’ to work up there all alone in the night. It certainly can be, although the silence of the Archives is often shattered by music or the stomp of feet from the Great Hall right above our heads. On one winter’s night I was working alone in the stores and sensed that someone was following me, but when I turned around to speak to them there was nobody there.

Of course the time when I should have been more aware of someone following me was when I (accidentally) locked my colleague Alan Hayward in –  fortunately his banging on the door prevented him having to spend the night in our stores. 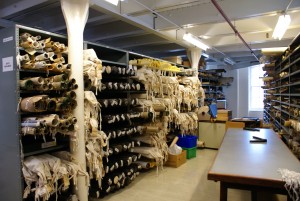 Our home is Blandford House that we share with Discovery Museum – built in 1899 by Oliver and Leeson as the Co-Operative Wholesale Society Offices and Warehouse. Tyne and Wear Archives have been located here since 1976, although Blandford House is not purpose built to hold records. We have adapted to our environment and we monitor temperature and humidity conditions with thermo hydrograph units. We have put UV filters and blinds on the windows to keep out the sunlight which can damage documents or frighten the staff. We have disaster kits, a water sprinkler system and emergency torches should the worst happen. Water damage to documents isn’t necessarily irreparable (techniques including freezing can help) but fire is obviously catastrophic – water sprinkler (or misting) systems are commonly used to protect archive stores these days – in the past, Halon gas-based extinguishing systems were used but these are not good for the environment. 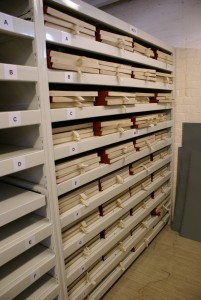 During the floods of ‘Thunder Thursday’ in 2012 the stores did us proud, with just a bit of water getting in through some windows – shelves were quickly covered over with plastic and only a bit of mopping up was required. Archives staff ended up where help was needed most on that day– in the flooded Discovery Museum basement. 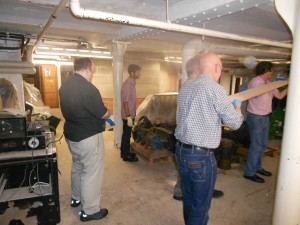 The museum basement after ‘Thunder Thursday’ – not the Archives!

We have over a million maps and plans, mainly ship plans which reflects this region’s proud shipbuilding heritage. In 2013 our maritime records were included in UNESCO’s ‘UK Memory of the World Register’ and they stated that ‘The records are strong in both breadth and depth, and no other archive in England and Wales appears to hold such a wide and comprehensive range of material’. The rolls and rolls and rolls of plans tucked into their shelves is one of the more striking sights in our stores. 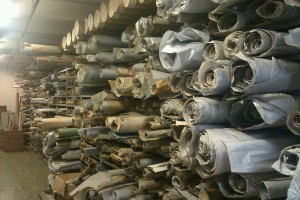 One young man on work experience was appalled by what he thought was an unpleasantly musty smell in the stores, although other visitors have expressed a particular fondness for the scent of our archives – which I think can be described as ‘eau de leather, wood, parchment, cardboard and age’. There is also the scent of vinegar in one of our photograph stores – since photographs from the 1920s – 1950s can suffer from ‘vinegar syndrome’ due to diacetate deterioration. However these photographs are kept in our climate controlled room to prevent further vinegarisation. I am often in the mood for fish and chips after visiting this room. 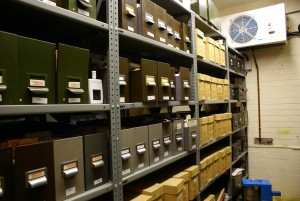 I sometimes wonder about the lives lived by the workers and visitors to this fine building in its 100+ years of history, but the history that is contained within our stores reaches far beyond Blandford House.  Our Archives hold the proof of the tragedies and triumphs of generations of Tynesiders and Wearsiders. They retain the memory of our region and represent who we are and who we were to researchers from around the country and around the world. The digital age holds new sets of challenges for all archives staff looking to preserve historic information held on computers rather than on paper. Yet for me there will always be something reassuringly permanent about a set of ledgers or a roll of maps kept safe on a shelf in a store, like ours. Next time you visit us and request a document, spare a thought for the staff in the stores – we may not get to see much sunlight that day as we roam the shelves. 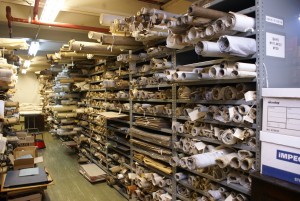 Even more maps and plans…