Behind the Scenes at the Regional Museums Store

My mother recently acquired a full-size potter’s wheel. Making a mockery of the laws of physics she managed to get it into the back of her car and drive it home. The unstoppable mantra of the shopaholics ‘I love it. I want it. I love it. I want it,’ must have been playing over and over in her head as it was only when she pulled up onto the drive and stopped the car that a more practical thought surfaced, ‘Where am I going to put it?’

This same conundrum is regularly faced by museum curators. There are just so many wonderful objects out there, objects steeped in the history of our region, objects that just need some TLC and a good home. How could we in good conscience turn them away?

Our galleries are expertly laid out so you can peruse a small selection of objects that help to communicate the ideas, culture, beliefs and lifestyle of a particular moment in history. But behind the scenes it’s a slightly different story. 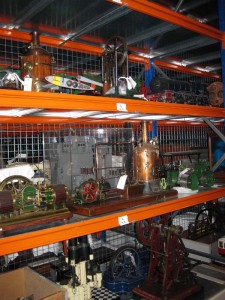 Tyne & Wear Archives & Museums has over 450,000 objects in its collection, from teeny tiny shells weighing no more than a grain of rice to locomotive engines that weigh up to 100 tonnes. Understandably, it’s the Maritime and Science and Industry departments that look after some of the heftier items in the collection.

There’s Turbinia, of course.  Over 30 metres long she has pride of place in Discovery’s entrance hall and is unlikely to be getting a change of scenery any time soon. We also have in our collection various full size boats, motor cars, Weighton’s epic Triple Expansion Steam Engine, and the monstrous Doxford Marine Oil Engine. Add to this a whole host of generators, motors, ship parts and turbines and you start to get the picture. 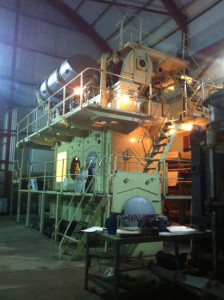 The museum is bursting at the seams. We don’t even have an office anymore; we just perch on piles of railway sleepers in the basement typing up documents on mechanical typewriters and making photocopies using an 18th century printing press. We had to set up one of our full steam turbine systems just to generate the electricity to put the kettle on…

I’m kidding, of course. But the bleak scene I’ve just created for you could be a reality if it wasn’t for our off-site storage facility, the Regional Museums Store at Beamish!

The RMS is our newest and largest storage facility with huge rows of heavy duty racking and lots of floor space for our giant objects. As part of our current project to improve access to the collection in the basement of theDiscoveryMuseum, we have been moving some objects over to the RMS. I like to think taking them there is a bit like sending them home. We try to organise the store so all of the washing machines are together, all of the engines, all of the models, just so they can, you know, catch up. 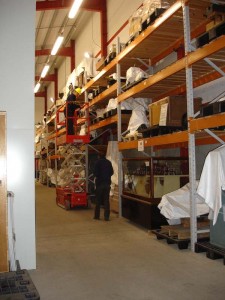 I described moving objects around in our basement store as a very heavy game of 3D Tetris. Well, moving objects around on heavy duty racking is the same except with the added dimension of height. Throw height in the mix and you need an even more impressive array of specialist equipment, which gives us a nice excuse to gleefully fly around the place on fork lift trucks and scissor lifts.

It’s not fair of us to keep this fantastic storage space and all the treasures therein to ourselves, so we’re currently working on a plan to open this space up to visitors. At present you can arrange an appointment to gaze upon the objects of your desire for a designated period of time, but in future we’d like to organise more regular access. Stay tuned to the TWAM blog for future developments.

2 Responses to Behind the Scenes at the Regional Museums Store