Bazaars have long been used by organisations as a way of raising money for good causes. The main event would usually consist of a variety of stalls selling donated items. Bazaars could be meticulously organised affairs and detailed programmes were printed to help promote them. The Archives holds quite a few old bazaar programmes and they’re particularly well represented in our church collections. 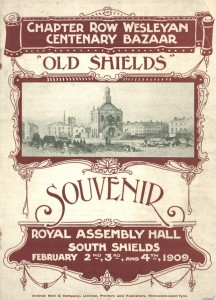 Some programmes were clearly produced at significant expense and didn’t just include details of stalls but also included names and even photographs of stallholders. There are some lovely examples in a souvenir of the Grand Bazaar held at High West Street Wesleyan Methodist Church, Gateshead, 19-21 March 1907. 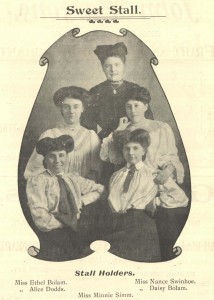 As you can see these stallholders are named, which makes the programme of real genealogical interest. I also have to admit that some of the hairstyles are outstanding. Alice Dodds in particular has more than a passing resemblance to Minnie Mouse!

A bazaar is more than just a sale it’s also a celebration, bringing community members together. These events often include entertainments such as games and musical or theatrical performances.  You might imagine that a church bazaar would be quite a straight-laced affair but that clearly wasn’t always the case. Bazaar programmes can sometimes make pretty hilarious reading as they give us glimpses into the antics of our ancestors.

Popular competitions in the early Twentieth Century included nail-driving and whistling for ladies (although not presumably at the same time) and hat trimming for gentlemen. 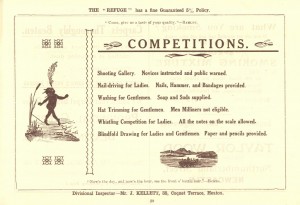 It seems that the organisers in Whitley Bay were expecting trouble with the nail-driving. The programme notes ‘Nails, Hammer and Bandages provided’. While those activities might seem a little bizarre they were probably great fun and enjoyed by all.

The Whitley Bay bazaar also included an unexpected activity – an occult experience provided by the Mysterious Thauma. You wouldn’t normally associate talking to the dead with a Methodist Church event. 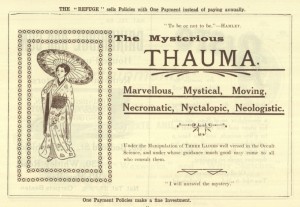 Altogether more strange is the ‘entertainment’ offered at the Great Bazaar held at the Southern Memorial Hall in Low Fell, Gateshead. For the price of a penny you could treat yourself to an electric shock at the hands of Master Arthur Coulson. It was probably considered therapeutic at the time. 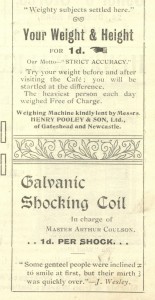 Given that it was a Methodist Bazaar I particularly like the rather disconcerting quote from John Wesley “Some genteel people were inclined to smile at first, but their mirth was quickly over”. Those words were taken from Wesley’s journal entries for October 1780 and I suspect that when he wrote them he didn’t have Master Coulson’s coil in mind.

Bazaars have witnessed a wide variety of events. One which caught my eye was an exhibition of chemical experiments by a Mr H.A. Brown. This was advertised in a programme for a Grand Bazaar in aid of the new Sunday Schools of Dock Street United Methodist Free Church, Sunderland held in November 1891. 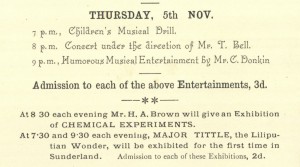 We can only hope that Mr Brown knew what he was doing. It seems like tempting fate to hold chemical experiments in a brand new Sunday School on Bonfire Night.

Bazaars have usually been well supported by local businesses, which placed advertisements in their programmes. These can really evoke a bygone era. The programme for the bazaar at Whitley Bay includes a page advertising tobacco and carpet beating. How times have changed! 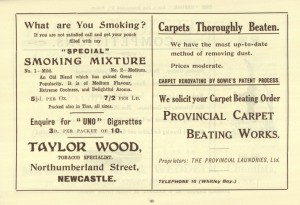 The adverts sometimes also include attractive old photographs or sketches of shop fronts. 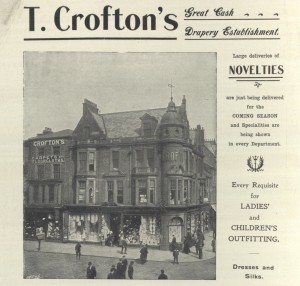 The Archives holds a wide variety of church records (besides bazaar programmes) covering the Tyne & Wear area. From baptism and marriage registers through to minute books and membership lists these documents can be invaluable for family history, local history or social history. To find out more why not pay us a visit or look at the user guides on our website. Details of our location and opening times can be found on our website.

If anyone has any memories that they would like to share of unusual events at bazaars then I’d be delighted to receive your comments. I’d also like to take this opportunity to thank the members of the North East Methodist History Society who recently visited the Archives. My session with them was hugely enjoyable and is the inspiration for this blog.

One Response to Bazaar or just bizarre?