Today I have been showing one of the baskets in the museums’ collection to a member of the Northumbria Basketry Group. The group were interested in seeing the replica creel that we had in our collection to compare it some one they had seen at the Ship Inn at Seahouses. 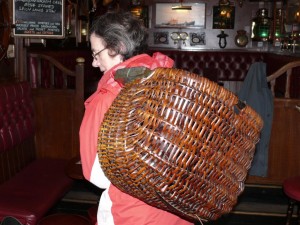 The creel at the Ship Inn 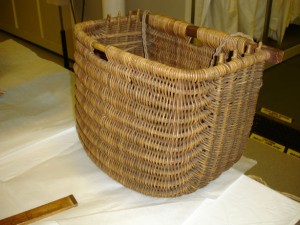 A replica creel in the museums' collection

A creel was used by fishwives in the Northumberland to carry fish once it had been caught. There are some really great photographs of the women in their traditional costume on the group’s webpage. 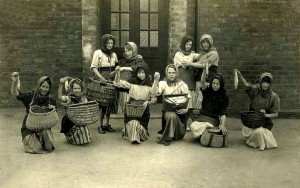 “It was a school play about the fisherwomen, c. 1922/3. I thought that as my mother was born in 1910 and she would have been about to leave school. Yes, she is on the left, Madge Smailes, and her sister Katie is in the middle with the herring in the basket. They are wearing exactly the same things as the women did.” Jean Jackson.

The group not only researches the history of baskets in the region but they also teach people how to make baskets using willow that they have grown themselves. The number of people wanting to learn the skill is growing every year. It was really interesting to hear about the revival of interest in this traditional craft, I wouldn’t mind having a go myself.