“At your service ma’am,” local brands which saw us through the war – by Hannah Mather, Customer Service Assistant and Volunteer

This blog examines brands of food, cosmetics and cleaning products which were locally made and advertised throughout WWII.

Thomas Hedley & Company Ltd was a major British Company, based in Newcastle, that manufactured soaps. Two of its most well-known products are Fairy and Oxydol Soap, which were key household products during WWII. During wartime, when many things were rationed, advertisements claimed that these products were multipurpose and longer lasting than other products. It was even claimed that Oxydol had the ability to do almost twice the washing per coupon, a bold claim, which was popular with consumers.

Advertisements for food, cosmetics and cleaning products were particularly popular in wartime, in women’s magazines like Woman. Often taking up a full page, the more they could do, the better! The advert below claimed Oxydol Soap could save both ‘soap coupons and clothes coupons’ with impressive results that would leave clothes looking ‘bright as new.’ 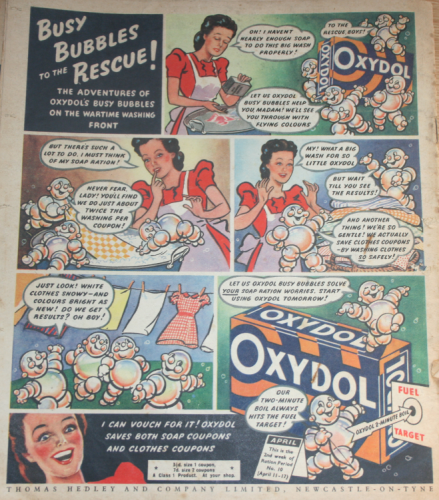 Another trusted household name, produced by Thomas Hedley & Company Ltd, was Fairy Soap. ‘The famous green household soap’ boasted about its ability to make floors and paintwork brighter. Despite being tough on stains, this product also claimed to be gentle on skin, being ‘kind as can be to your hands.’ Adverts for Fairy Soap took on the military theme during the war often using slogans such as ‘I’m on home service’ and ‘at your service Ma’am’ two examples of which are below. 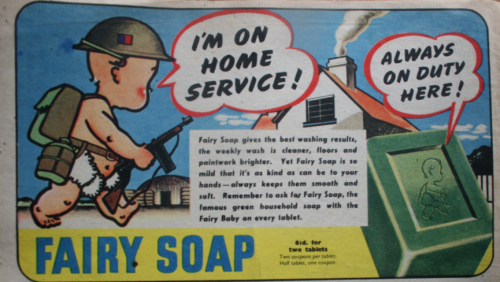 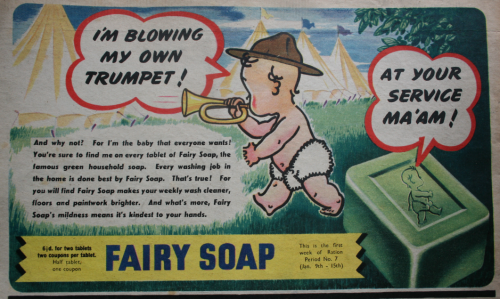 ‘What about my looks?’

Whilst Thomas Hedley & Company Ltd took care of your home, there was a rise in popularity for cosmetic and health products that were affordable during wartime. Another big brand, produced right on our doorsteps in Newcastle upon Tyne, was Andrews Liver Salt. This product was thought to create ‘inner cleanliness’ as it ‘sweeps away, trouble-making poisons’ from the body. By achieving this ‘inner cleanliness’ adverts, like the one below, claimed that people would also notice improvements to their skin as a result of using the Liver Salts for ‘inner cleanliness comes first.’ 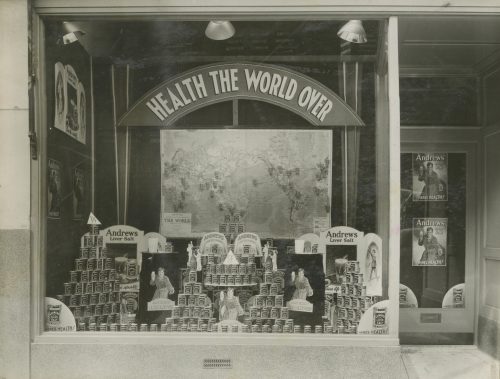 Andrews was manufactured and sold near and far by Scott & Turner Ltd. This picture, which can be dated to around 1934 (or earlier), shows a window display of Andrews Liver Salt. It was by the time of WWII already a world known brand. 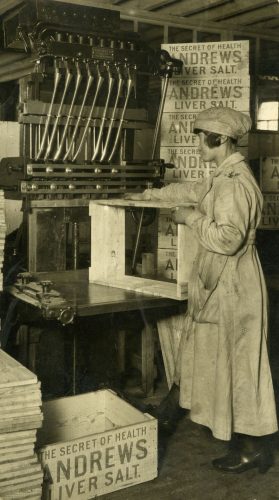 Photograph of a woman working in a factory, making boxes for Andrews Liver Salt. Courtesy of Tyne & Wear Archives.

As a young woman born in Newcastle, I can’t help but feel a great sense of pride in what was once very local industry, one that produced brands which are still going strong. Though time has passed, we can be assured that these products have helped put Newcastle on the map as the production place for many great products that saw us not only through the war, but are still used to this very day.