In Discovery Museum’s basement, beneath the feet of our unsuspecting visitors, there are store rooms full of even more science and technology artefacts awaiting their time in the spotlight.  My colleague Toni previously blogged about some of her experiences working to sort out one of these stores (/behind-the-scenes-in-the-science-and-industry-stores/).  As work progressed we realised that the basement was already home to much of our historic electrical engineering collection.  We therefore decided to turn one of the largest of the basement rooms into a dedicated electrical history store, Arcs & Sparks. 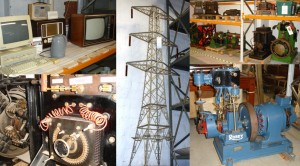 We’ve organised the store to tell the story of electrical engineering from the generation of electricity right through to its use in everyday appliances.  This collection is of national importance and contains some real gems going back to the earliest days of electrical generation and use.

Our 1850s Nollet dynamo (patented in 1850 by Belgian inventor Floris Nollet) has a shaft with sixteen coils of wire (within a brass band) which spin between the poles of eight large red horseshoe magnets. 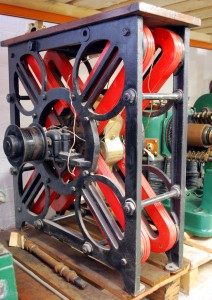 This generated enough electricity to do useful work, such as powering arc lamps in lighthouses.  With its obvious red magnets and wire coils, the Nollet dynamo is great for explaining the basic principles of electricity generation.

Once an electricity supply was available, magnetism could be created by passing current through another set of wire coils known as “field coils”.  These “electromagnets” could then be used in dynamos instead of the large and heavy horseshoe magnets.  Henry Wilde invented his electromagnet generator in 1873. 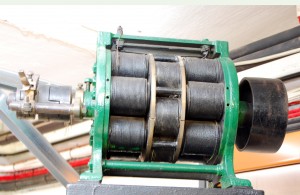 Our Wilde generator is only a quarter the weight of the Nollet dynamo but just as powerful.  It was made in 1883 to power arc lamps at the Wallsend Café.

The shafts of these early dynamos were spun by reciprocating steam engines like that in our distinctive blue Robey unit, but soon the faster and more efficient steam turbines took over (we have a couple of these in the store too).  Interestingly, most electricity is still generated in exactly the same way today, by giant steam turbines.  Even nuclear power stations simply use the heat of the nuclear reaction to boil water to make steam. 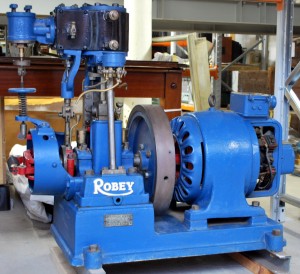 The next section of Arcs & Sparks explores how the electricity was controlled and transmitted from the power station to homes and businesses.  There are transformers, voltmeters, cables and cable joints, insulators, switchgear and fuses, and models of other things that would be just too big to fit in the museum.

Models of Reyrolle circuit breakers, a selection of voltmeters, and a model transmission tower or “pylon”

Then, around the next corner, is the last section which compares how electricity was first used with what it’s used for today.

People started using electricity before anything like a mains supply was available, relying instead on basic battery cells.  Right from the beginning some saw its potential to facilitate instant communication, and the first commercial electric telegraph system, by Cooke & Wheatstone, started sending text messages in 1837. 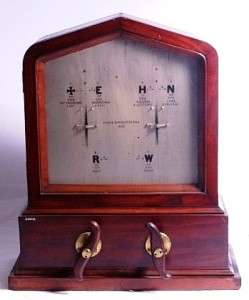 Electric telegraphy was first used by the new inter-city railway companies as a means of communication even faster than their trains, but was soon adopted by other businesses and by the general public for personal messaging.

Joseph Swan invented the light bulb in 1879.  His house in Gateshead was the first in the world to be lit by electricity, and in 1881 he established the world’s first light bulb factory in Benwell, Newcastle. Fittingly then, Discovery Museum has one of the very finest collections of early lamps, including some of Swan’s first production models.  Many of these are on permanent display in our Science Maze gallery, but most of the remainder are carefully stored in Arcs & Sparks.

By the end of the 19th century suddenly everyone was thinking about electricity and finding new things to do with it.  Such as…electrotherapy anyone? 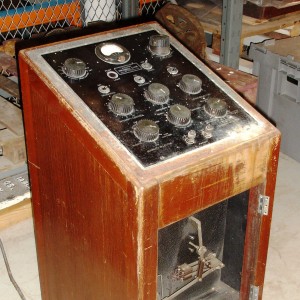 Or how about a wireless electric tramway?  This stone box with a metal lid is an electric stud from a Brown Surface Contact System tramway.  Instead of “unsightly” overhead wires, the cabling was buried between the rails where it fed studs like this at the road surface every few feet. 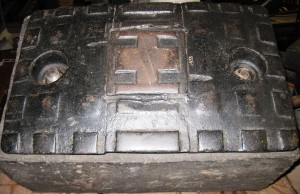 When a tram passed over a stud, its on-board magnet pulled up a contact switch within the stud which made its surface live.  The current was then collected by a skate beneath the tram.  The switch dropped back down after the tram had passed.  At any one time, the tram would be in contact with two or three such studs.  Sounds clever, but in very wet weather this system could be lethal; there are stories of horses stepping on supposedly safe studs and being electrocuted.  This system was only ever used by Wolverhampton Corporation Tramways, from 1902 to 1922.

Electricity came into its own in the 20th century when used to power labour-saving devices such as vacuum cleaners and washing machines, and we have a selection of these and other gadgets in the final part of Arcs & Sparks.  At first, electric motors simply mechanised the former hand processes so early appliances tended to resemble their unpowered predecessors.  Later on, things were redesigned to make better use of the rotative properties of the electrical motors, so we got front-loading washers, spin dryers and cyclonic vacuum cleaners. 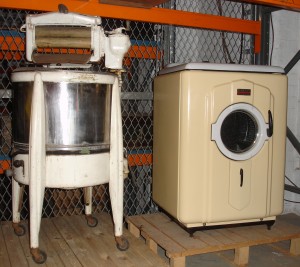 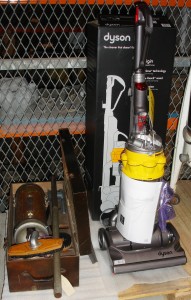 Then we have radios, computers, a television, and an electric kettle.  We’re now so addicted to electricity that we can’t even make a cup of tea without it! 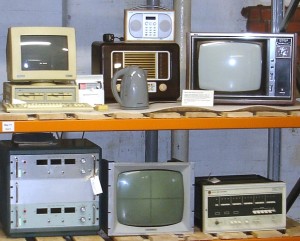 If this has…um…sparked your interest, please come and join one of our free guided tours on the first Wednesday of every month: http://www.twmuseums.org.uk/discovery/whats-on/events/behind-the-scenes-the-arcs-and-sparks-store.html.