An update on progress with the Sunderland Shipbuilding archives project

Readers of my previous blogs may remember that in October I gained a ‘glamorous’ assistant, Colin. Over the last few months he’s been working hard sorting and listing a very large series of ships plans for the firm Bartram & Sons Ltd. The work is ongoing but so far he has uncovered a number of very interesting plans. The plans of one wartime vessel stand out in particular, ‘Empire Heath’, a CAM ship launched in April 1941 (yard no. 287).

The abbreviation CAM stands for catapult aircraft merchantmen. As Colin explained to me, following the fall of France long range German bombers were able to reach convoys in the mid-Atlantic beyond the range of Allied fighters. As an emergency stopgap measure the Admiralty ordered 50 rocket powered catapults and modified Hurricane fighters to be fitted to selected merchant ships. After the fighter was launched there was no way for the aircraft to land back on the ship so the pilot had to bale out or ditch in the sea and hope to be picked up by the vessel it was protecting. The courage of the pilots prepared to fly in such circumstances is truly humbling. 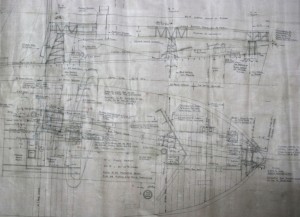 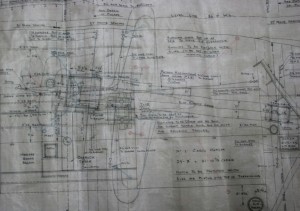 Between November 1941 and July 1943 a total of nine combat launches took place with the result that eight German aircraft were shot down, while one Allied pilot lost his life. The ‘Empire Heath’ was one of the CAM ships to launch her Hurricane and details of that incident can be found on the website uboat.net. In 1943 the CAM programme came to an end and the catapult was removed. Tragically, the ‘Empire Heath’ didn’t survive the war and was sunk by a u-boat in May 1944 with considerable loss of life.

For my part, I’ve been busy this month cataloguing the operational records of Joseph L. Thompson & Sons Ltd. There are two particularly large series of records that have taken the most time to list – a huge run of ships specifications and a set of 250 particulars and cost books.

The specifications date from 1870 to 1978 and include a hull or engine specification (often both) for almost every ship built by the firm between those years. These specifications were agreed between prospective shipowners and the ship and engine builders as part of the contract process. They contain a considerable amount of information about the construction and outfit of each vessel, including dimensions, materials used, workmanship, machinery and detailed descriptions of accommodation. The specifications contain pretty much everything you could wish to know down to the number of pots and pans onboard. The specifications are also often annotated with additions or alterations agreed after the contract was signed.

The Joseph L. Thompson & Sons collection includes two specifications for the ‘Empire Liberty’, launched in August 1941. This ship is acclaimed as the forebear of the famous Liberty ships built by the US Government during the Second World War. 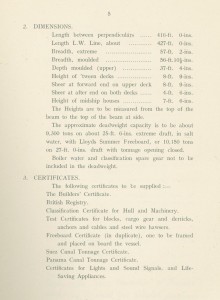 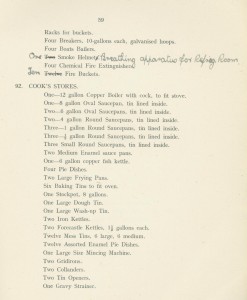 The ships particulars and cost books are slightly unusual and I haven’t come across anything quite like them in the other collections. These books survive for the period 1880-1913 and were pre-printed with spaces left for information to be entered. They provide fascinating and detailed information about the particulars, progress of construction and cost of materials and labour for each ship. 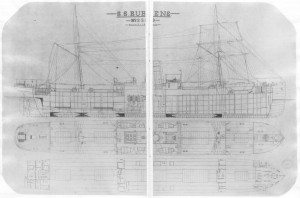 Last week I also catalogued the public relations records of Joseph L. Thompson & Sons Ltd. I’m a big fan of aerial photographs and was delighted to see that the records include three very nice aerial shots of the shipyard and surrounding area, including this image taken by Turners (Photography) Ltd in June 1955. 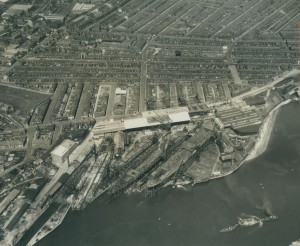 In the last few days I’ve just started working on the administrative records of Bartram & Sons Ltd. I’m sure that some more exciting discoveries will emerge as I work through those and I’ll look forward to reporting them in my next blog in January.