‘Betel nuts’ are one of the most prevalent addictive habits worldwide, along with tobacco, caffeine, and alcohol. ‘Betel nut’ chewing is actually the chewing of a mix of the areca palm seed (dried or fresh), slaked lime, and other additions for flavour or colour, wrapped in a betel vine leaf to make a parcel. Betel nut are arranged and flavoured differently in various regions of South East Asia. 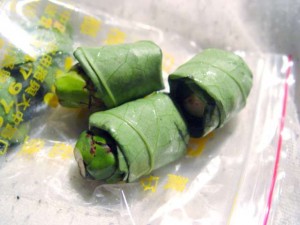 The practice of making betel nut parcels with areca nuts and lime may have originated in South and South East Asia, where it is likely that the areca palm was originally native. 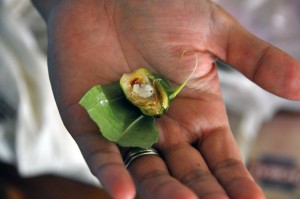 It is thought that the chewing of the areca seed with lime began before the introduction of the betel leaf based on where these plants grow. In some regions it may have been associated with religious ritual or ceremonial occasions, but this is no longer necessarily the case. 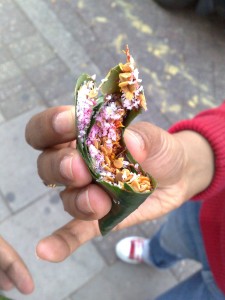 Although certain extra ingredients are considered auspicious for specific occasions, such as spices to change the taste or colour, the chewing of betel nuts is an everyday occurrence.

In Papua New Guinea, betel nut chewing is a centuries-old tradition and is associated with hospitality, friendship, and romance. The surviving materials from the earlier periods of this tradition are part of ethnographic collections around the world, including the Great North Museum: Hancock, as examples of Papua New Guinean craftsmanship and culture. 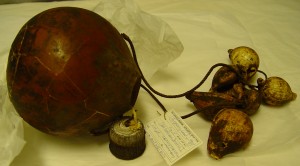 Containers carried slaked lime, a white powder, made on Papua New Guinea by burning dried corals and collecting the lime from the ashes. They would be worn on a belt or as a purse and kept on the owner’s person much of the time. 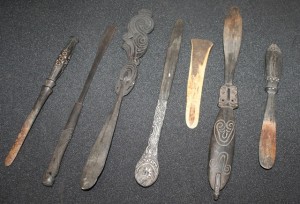 The spatulae were used to scoop lime out of the containers, and to portion it out to make betel nut parcels.

Papua New Guineans now generally use jars or tins to carry their lime, and use betel flowers  or mustard seeds to add the lime to the betel nut. Although the paraphernalia has changed, chewing betel nuts is still a widespread practice in Papua New Guinea. Vendors are common, selling pre-made parcels or the component ingredients. As well as the betel leaf or flower, lime, and areca nut, tobacco is a popular addition to betel nut parcels in Papua New Guinea. 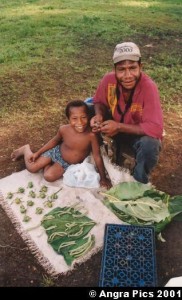 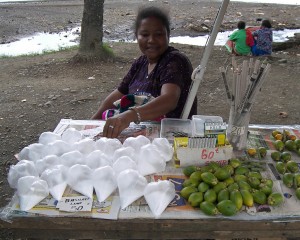 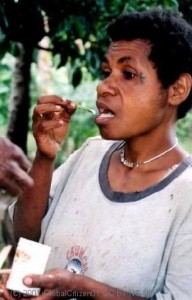 In Papua New Guinea, the fresh nuts are chewed with lime and betel leaf, sometimes with additions like mustard seed. The nut is chewed in the mouth until pulpy, then betel vine flowers, mustard seeds, or a lime spatula is dipped in lime, and the lime is pushed into the chewed areca nut pulp. 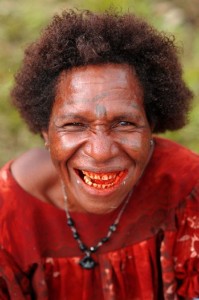 When the areca nut, betel leaf, and lime are combined, it results in a mild but addictive stimulant. The addition of the slaked lime to the betel flowers or leaves and the areca seed increases the alkalinity in the mouth of the chewer. This releases the alkaloids in the seed, especially arecoline, the active ingredient for the drug’s effects. The distinctive red colour, which stains the lips, teeth, and gums of chewers, comes from the same chemical reaction between the betel leaves, the areca nut, and the lime powder. This bright red colour also dyes the sidewalks, streets, and buildings in Papua New Guinea, as the juices from the nut cannot be swallowed. 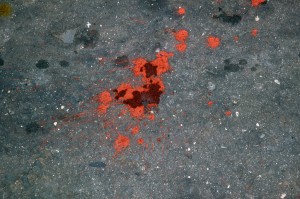 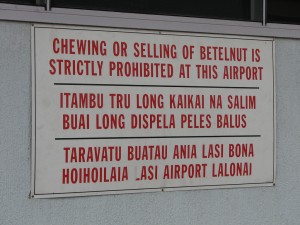 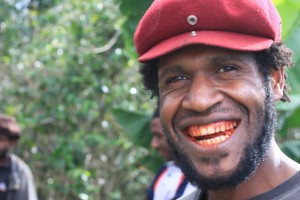 If you would like to read more about betel nut chewing or the recent controversy over the betel nut bans, check out these links.