An interesting example of collaboration between Tyne and Wear

It’s been another rewarding month on the Sunderland Shipbuilding Archives Project. I’ve been working on the records of William Doxford & Sons Ltd and have now largely completed the cataloguing of the firm’s operational and publicity records. These include some fantastic images of the Doxfords shipyard, engine works and the vessels and machinery they built. I hope to include some of these in future blogs but as a taster here’s an image of torpedo boat destroyers being built for the Admiralty during the First World War. 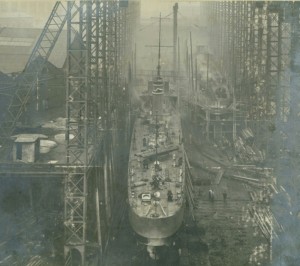 Meanwhile, Colin has been very busy as usual. He’s featured in a short video about CAM ships built in Sunderland during the Second World War, which can be seen online at http://www.youtube.com/watch?v=K3QlsQa-9YM.

He’s also finished work on the Sunderland ships plans we hold and catalogued the ships photographs of the firm, John Crown & Sons Ltd. This is one of the smaller shipyards covered by this project. While Crown wasn’t as prolific or famous as some of its local rivals such as William Doxford & Sons and Sir James Laing & Sons it did nevertheless build a number of interesting vessels.

The Crown records include a particularly nice series of photographs of the vessels built by the yard. These date from 1948, a couple of years after the shipyard was taken over by the neighbouring shipyard of Joseph L. Thompson and Sons.

One of the more interesting images is this photograph taken in 1954 showing wooden chocks being knocked away from the keel of the vessel ‘Andwi’ just prior to launch. 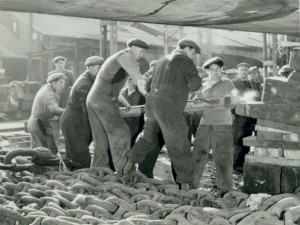 This was a vital part of the launch process but one that’s rarely documented so clearly.

Other fascinating finds include photographs of two hopper barges ‘Wear Hopper 3’ and ‘Wear Hopper 4’ built by John Crown & Sons Ltd in 1959. Unusually, these were launched together as ‘conjoined twins’. 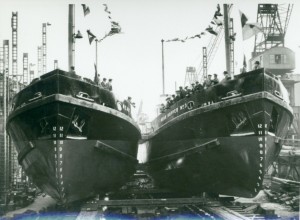 The highlight of the Crown photographs, though, is a set of over 70 images of the ‘Rondefjell’. This vessel is very unusual in that it was launched by the shipyard in two halves in April and October 1951. 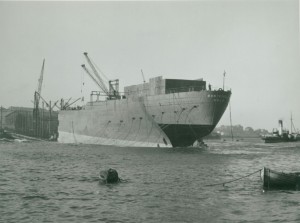 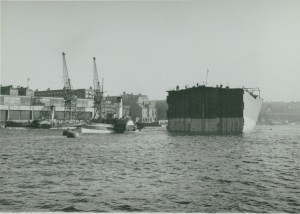 After launch the two halves were towed to the Middle Docks at South Shields where they were joined together in late October 1951. 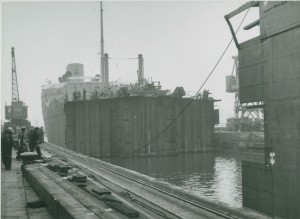 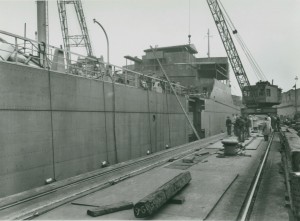 This method of construction led to the ‘Rondefjell’ being known locally as the ‘Half Crown Ship’. By building in two halves Crown’s were able to build larger vessels than would otherwise have been possible at their shipyard. At the time of construction the vessel was the longest ever built on the River Wear. 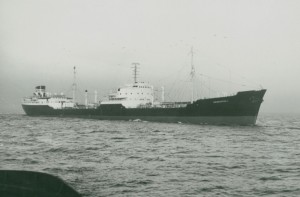 The ‘Rondefjell’ is an excellent example of what can be achieved when Tyne and Wear work together, as they do through our Archives and Museums Service.

I’d like to finish this month’s blog by paying tribute to Colin for the massive contribution he has made to this project. He left Tyne & Wear Archives & Museums at the end of last week and will be sorely missed by his colleagues. His expertise has been absolutely invaluable and his unique sense of humour has brightened many recent rainy days. I hope that our work cataloguing Sunderland’s shipbuilding archives will serve as a lasting testament to his knowledge and dedication.