Towards the end of August a member of the public dropped some items off at the reception desk in South Shields Museum & Art Gallery. The individual preferred not to leave a name or contact details, but the items were duly placed on my desk, ready for me to look at when I was next in the office. It’s my job to decide if an item would make a good addition to the museum’s collection, based on its local relevance, provenance, and whether or not we already have similar examples. 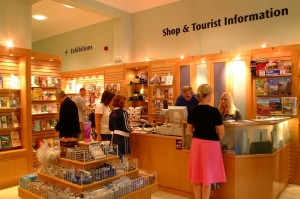 Among the items was a tin can of movie film. Tyne & Wear Archives & Museums don’t normally collect film, as we don’t have the proper facilities or staff to store, preserve and make film accessible. However, if a film is offered to us, we would normally pass it on to the Northern Region Film and Television Archive (NRFTA), who are based in Middlesbrough.

I opened the can and inspected the end part of the film, which read “Seaton Burn Flower Show & Sports, Sat. Aug 30th”. Seaton burn is a village in Tyne & Wear, north of Newcastle upon Tyne and near Wide Open, close to the Northumberland county border. Clearly, this was the title of an old news reel, probably made for distribution to local cinemas. 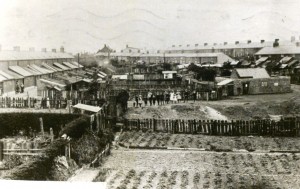 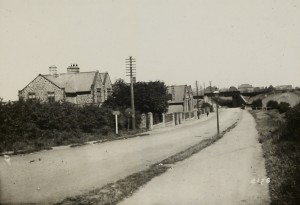 I got in-touch with David Parsons, Film Archivist at the NRFTA, who said that the film could well prove to be “quite important”. He was, however, concerned that it might be nitrate film, used in the early days of cinema and potentially dangerous, with a tendency to burst into flames if not kept in the right conditions. 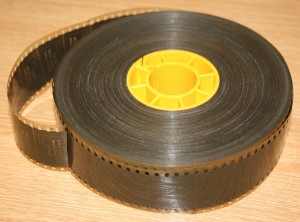 The film in question

I took some pics of the film and sent them to David, who confirmed that the film was indeed nitrate stock, and would need to be handled very carefully. He said that the NRFTA would love to take possession of the film, but that as it was nitrate, it would need to be sent for specialist storage at the British Film Institute (BFI) National Archive in Berkhamsted, Hertfordshire, where it would be securely stored and a copy made, enabling it to be safely viewed. 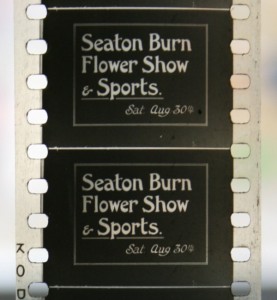 And so that brings me to today, when a specialist transportation company have arranged to pick up the film and take it from South Shields to the BFI in one of their temperature controlled vehicles, within an airtight cylinder. Such measures are necessary to ensure against the film spontaneously combusting! 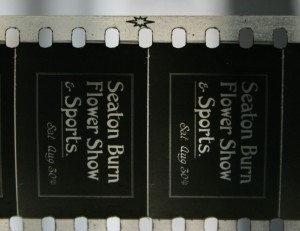 I’m intrigued to discover what is on the film, as I was only able to unravel enough to look at the end bit with the title on. It is believed to date from about 1920 or thereabouts, judging among other things by the style of the title lettering. When I hear back from David Parsons at the NRFTA, via the BFI, I’ll blog again about the contents of this mystery film!

6 Responses to An explosive flower show