One of my hopes for the ‘We Mak’em’ Sunderland Shipbuilding archives project, when it started in June, was that it would encourage former employees of the shipyards and their families to come forward with fascinating additions to the collections we hold. Last month this hope was realised beyond my wildest expectations when we received a fantastic donation of documents for the shipbuilding firm, Joseph L. Thompson & Sons Ltd. This generous donation was made by Sarah Thompson, a member of that famous shipbuilding family.

It was clear from early on in the project that there were major gaps in the records for Joseph L. Thompson & Sons Ltd. In particular no Board of Directors’ minutes were known to survive and I feared the worst – that they had most likely been lost or destroyed. I am excited to report that, thanks to Mrs Thompson, we now hold a complete record of both Board and AGM minutes for the firm dating from its establishment as a limited liability company in 1894 up to 1954. The donation also includes a signed set of the firm’s annual accounts from 1894 to 1969. These are key records for anyone researching the firm’s history or indeed Sunderland shipbuilding in general. They give us a unique insight into the running of the firm covering a variety of subjects including orders, the development of the shipyard premises and the company’s financial position.

I’ve only been able to enjoy a quick browse of the minute books but have already come across a few interesting items. For example, an entry from July 1923 documents the decision to built two small colliers in order to keep the shipyard operational in a difficult economic climate. 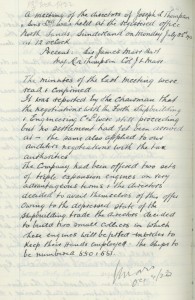 The Board minutes for 10 February 1941 are also noteworthy because they refer to a hugely significant journey to the United States by Cyril Thompson, Managing Director of the firm. He headed an Admiralty Merchant Shipbuilding Mission to get American yards to construct cheap and economical vessels for the British Government to a prototype designed by Joseph L. Thompson & Sons.

As the minutes indicate on the return journey from America, the ship on which Thompson was travelling, the ‘Western Prince’ was torpedoed and sunk in the Atlantic. Thompson and his fellow survivors escaped in lifeboats and were picked up by a tramp steamer, which took them back to Britain. 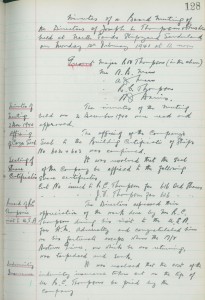 The Mission proved a success and contracts were signed to construct two new shipyards in Maine and California in order to build the sixty cargo vessels that the Admiralty wanted. As it turned out, the Mission was to have even greater unforeseen consequences. The Joseph L. Thompson & Sons prototype proved so popular that it was used by the US Government as the basis of over 2,700 ‘Liberty ships’ built at American shipyards between 1942 and 1945. It’s no stretch of the imagination to suggest that those ships were vital to the ultimate success of the Allied war effort.

The records donated by Mrs Thompson also include numerous other items of interest including a salaries book dating from 1878 to 1885, giving the names of officials and foremen during that period. Other aspects of the firm’s work are covered, with operational records such as estimates and books of lines plans, as well as publicity material such as photographs and scrapbooks.

There are a small number of impressive early photographs of vessels built by the firm, such as this image of the launch of the ‘Vencedora’ in 1860. 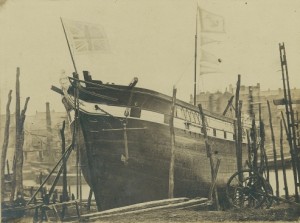 The photographs also include several images of the ‘Coogee’, originally launched by the firm in 1887 as the ‘Lancashire Witch’. The ‘Coogee’ now lies shipwrecked outside Port Philip Bay, Melbourne, Australia and is apparently very popular with divers. 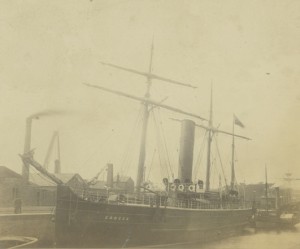 Before finishing this blog I must say a big thank you once again to Mrs Thompson for her generosity. There are gaps in the records of some of the other shipyards covered by this project and this recent donation has given me renewed hope that important documents, once feared lost, may yet emerge. If anyone is aware of such material I would be delighted to hear from them.

12 Responses to An exciting recent donation of Sunderland shipbuilding archives