Hello, my name is Angela and I am studying for an MSc in Information Science at Northumbria University. I also volunteer at the Great North Museum: Hancock Library with its fabulous collection of books on natural history, local history, ancient history and so much more. It has been a great joy to have the opportunity to read some of these great and unique pieces of literature. Here I wish to share with you my experience of Hans Sloane’s ‘A History of Jamaica’ Volume I (1707) & Volume II (1725).

Hans Sloane (1660-1753) went to Jamaica in 1687-1689 as doctor to the island’s governor, the Duke of Albemarle.  The Duke may have unfortunately died during Sloane’s time there but the resulting History of Jamaica is a triumph. The two volumes are majestic books filled with vibrant narrative on life in late 17th century Jamaica alongside stunning illustrations of the fauna and flora of the island. 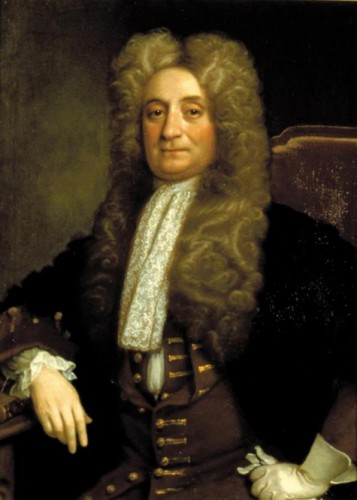 Volume I gives the reader, as the title suggests, a history of Jamaica from Christopher Columbus onwards followed by a detailed description of the island as Sloane finds it.  We learn that the population of Jamaica is diverse – English, Spanish, both rich and poor, and African and Native American slaves. Sloane neither condones nor condemns the practice of slavery, detailing it as something that simply exists. This attitude extends to the detailed and distressing descriptions of the horrific punishments meted out to slaves.  To the 21st century reader this attitude can seem callous, but Sloane is only being a man of his time.

What is perceptible is Sloane’s genuine respect for different cultures. He believes the African and Native American way of life is much healthier than that of Europeans and far better suited to the Jamaican climate. Examples given are the use of hammocks for resting, night time camp fires and daily herbal baths.  He also praises the lack of avarice in these communities, feeling the English would benefit greatly from adopting this attitude.  Sloane’s interest in the culture even extends to transcribing songs into sheet music.

The rest of Volume I includes a section on local diseases and cures, not surprising, considering Sloane’s medical background. A segment on local recipes describes the modern day Jamaican favourite Jerk Chicken. In Sloane’s time, we learn, this was prepared to take on hunting expeditions.  The final, and largest, part of the book is devoted to descriptions and illustrations of Jamaican plants and mammals in fantastic detail. The pictures are beautiful. 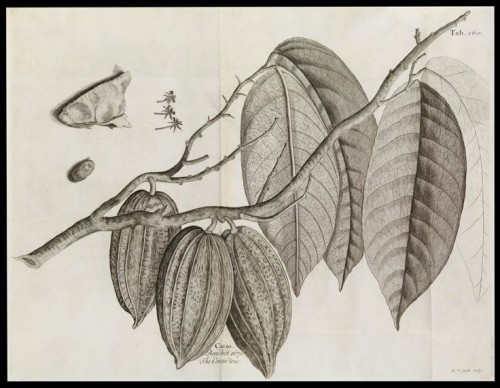 Volume II arrives 18 years after Volume I. The introduction is an entertaining read seeing Sloane tackle his literary critics. He dismisses complaints about mistakes in Volume I saying it was the effect of the climate. With regard to the length of time that elapsed between the volumes, Sloane declares that he has been far too busy practicing medicine and dealing with his affairs.  In response to the notion that he was critical of Jamaica, Sloane firmly declares that in Jamaica he is very much ‘at home’.

In term of content, the second volume concentrates on geology, insects, fish, birds and trees. Convivially written, there is much to learn. The Coconut Tree has a ‘good and wholesome nut’ sustaining a great many Jamaicans. Sloane unwittingly advocates the vegan diet, believing coconut milk is as good as ‘ordinary milk’ and a key ingredient for a marvellous cheesecake. 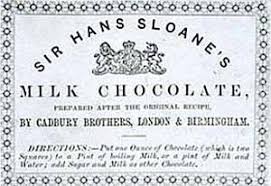 Sloane is credited with inventing hot chocolate.  He is certainly fond of the chocolate drink he encounters in Jamaica though it takes him a year to be able to stomach it. We learn how chocolate is used among the different communities on the island.  Africans use chocolate to wean their babies. The Native Americans prefer their chocolate with pepper. The Spanish meanwhile add chilli and have become addicts consuming between five to six cups a day.  Sloane warns us that ‘those accustomed to it (chocolate) cannot be without it’.

The book concludes with an amusing description of Sloane’s voyage home to England and his attempt to bring back specimens from Jamaica. Things do not go to plan. His crocodile dies while his pet snake is shot dead in a panic by one of the crew. Sloane however did manage to arrive home with his non-living artefacts and as a result we have the British Museum after he bequeathed his collection to the nation on his death. 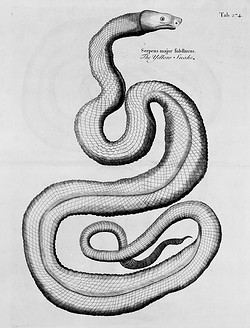 A History of Jamaica gives the reader an entertaining insight into a very different world. Sloane must have put a great deal of time, love and effort into creating these works. Delving into these massive volumes does not disappoint and it feels a great privilege.