I have worked at Arbeia Roman Fort and Museum for nearly four years now and I’ve only just been on a full tour of the site! I know I should be ashamed of myself and I am!

But I’m glad I finally got around to doing it because there’s so much more to Arbeia than I thought.  Obviously I already knew all the essentials I need for my job like dates and how a fort would have looked during Roman times but I’d never fully appreciated the vast and varied history of the site.  Occupation began as far back as the Iron Age and certainly didn’t end with the departure of the Romans.

With each of these blogs I’m going to attempt to provide a little-known truth about the history of Arbeia and hopefully bring the site to life!

After the departure of the Roman Army in approximately 410AD, Arbeia and its rich history were forgotten for over 1000 years.  The land was farmed and communities sprung up but the Romans remained buried in time.  Then, in 1672 a spectacular discovery was to change all of this and begin the story of Arbeia’s rediscovery. 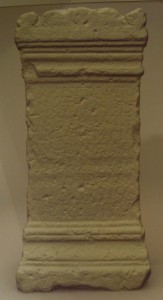 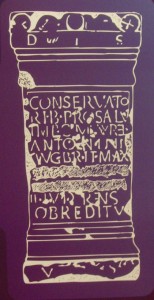 A farmer was ploughing his fields when he came across a stone inscription. It was sent off to Oxford where experts discovered that it was a Roman altar dedicated to the gods, thanking them for allowing the safe journey back to Rome of Caracalla and Geta.

They were the feuding sons of the Emperor Septimius Severus who had visited Arbeia as part of his campaign to occupy and pacify Scotland, a mission which had achieved some degree of success. In AD211 he died in York, the rumour being that his own son, Caracalla, had bribed the doctor to hasten his death! Ahh, families! 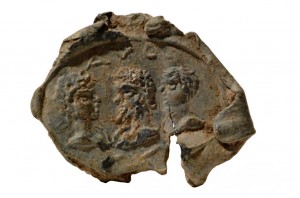 After their return to Rome, tensions mounted between the two brothers, resulting in Caracalla stabbing Geta to death in front of their mother.  Caracalla himself was later murdered by his own soldiers as he relieved himself behind a palm tree! Hmmmm….Karma?

After the discovery of the altar, the site remained as farmland for another 100 years.  Obviously the investigation of Roman finds was not high on the list of priorities for 17th Century farmers!

Many people believe that excavations at Arbeia didn’t begin until 1845 but it has since been discovered that in 1796 the area was dug up, in a fairly amateur fashion, by Nicholas Fairless, a wealthy local magistrate.  He had recently visited Pompeii and was spurred on by this experience to make his own grand discoveries. I know how he felt – I always come back off holiday with big plans and ideas which rarely come to fruition!  However, to give him his dues, Nicholas did set to work straight away and made some very interesting discoveries.

He had heard about the 1672 altar so he knew there must be more Roman remains in this area and with the help of some friends and local miners he uncovered a Bath House. This has unfortunately yet to be rediscovered. Rather tragically, Nicholas was later killed by striking miners who were unhappy about the working condition at their colliery.

It seems violence and bad luck have followed this altar from the day it was first offered up to the gods.  I’m sure it’s all coincidence but just to be on the safe side, I’ll keep my distance from now on….

The altar can be seen as part of the permanent collection at Arbeia Roman Fort and Museum in South Shields. For more information go to:

2 Responses to Altar your Preconceptions