‘All Surface, All Form’: A Guest Post by Poet in Residence Joanne Clement

Last Winter, I began visiting the Shipley Art Gallery to familiarise myself with their collections whilst researching for my PhD. For the study, I am examining the engravings of Thomas Bewick to write a new collection of poems. As Bewick’s creative legacy is spread across Tyne and Wear Archives, I spend lots of time in museums and galleries looking at their Bewick holdings as well as the wider collections they house. For me, artworks and archives hold a world of creative potential and I am especially interested in their socio-historical relevance and above all, the poetry embedded within them. 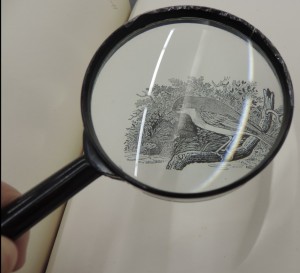 ‘Thomas Bewick’s Birds. Photograph my own, with thanks to The Natural History Society Northumbria’

Spending time in TWAM for my research really is the best job in the world. Earlier this year, I was excited to become the Shipley’s Poet in Residence as part of Write Around the Toon, a project which aims to place writers from Newcastle University into major cultural venues of the region. Residency is an interesting concept for a poet as very often you ‘live in’ your practice and take it with you, whenever and wherever you go. With the aim to do more than write poems in response to the collections here, I was eager to go beyond an insular residency and instead, to share my research and engage my practice and interests with the local community through workshops.

We put out a public call for participants to join in poetry workshops and I soon met a local group of writers called ‘The Scribblers’. As a reader of Romantic literature the group’s name had exciting connotations for me; I thought of the ‘Scriblerus Club’, a collaborative association of 18thC satirists. Fittingly, my group were fantastic fun from the outset, welcoming and willing to try out new writing activities. I led workshops in response to a variety of the Shipley collections. 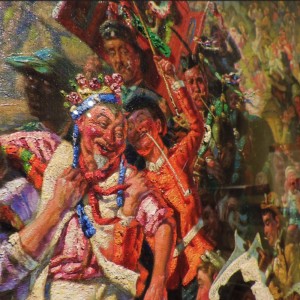 Blaydon Races’ William Irving (1903). Photograph my own with thanks to Tyne and Wear Archives and Museums

One painting that especially caught my attention was William Irving’s ‘The Blaydon Races’. A snapshot in oil, it depicts a day off in 18thC North-East and its carnival atmosphere. I’m a huge fan of the folk song by Geordie Ridley. It’s a much-loved unofficial anthem which seems to transcend the Tyne divide, inspiring all who know it to join in…regardless of how well you can sing. In one session, after a close reading of some poems, we sat in front of Irving’s painting and after a sing-song, over the course of two hours we examined the painting, picked out figures and wrote in response.

The resulting work was vivid, musical and full of authentic historical character. We had poems on gamblers, fighters, lovers, a dog and even a sleeping drunk. At The Late Shows in May, the group performed an impressive selection of these Blaydon poems, bringing the painting to life for the audience. These poems are currently on display in the Shipley Lounge and I highly recommend you pop in for a read, then go take in the gallery’s brilliant collection.

Alongside the workshops, in response to the new exhibition ‘Surface Deep’ and the 1960s theme chosen for The Late Shows, I began developing writing on the topic of the moon landings. My writing soon developed into a different animal (as they often do) and became a meditation on the seas of the moon, notions of ‘the alien’ and the current refugee crisis. From this, I developed a poem-film with a stirring sound composition, an ekphrastic response by Phil Begg. The poem-film transports viewers into the vacuum of space, poised upon the (un)natural and considering geographic and emotional distance. ‘Lunar Mare’ played throughout the Late Shows. I look forward to discovering what the residency will inspire next.

Click on the video above to watch Lunar Mare (2016), a collaborative poem-film by Joanne Clement and Phil Begg.