Here’s a picture of Lou, one of TWAM’s Conservators. She’s currently busy preparing objects for an exhibition which will celebrate 150 years of South Shields Museum and Art Gallery. 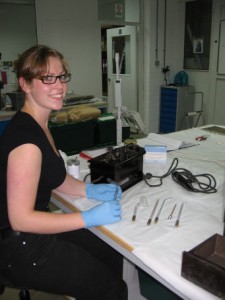 Lou in the Conservation Studio with the UV Ray Machine

Adam the exhibition curator selected the UV Ray machine (TWM : 2010.3227) because it “represents the breadth and wackiness of TWAM’s collections”. 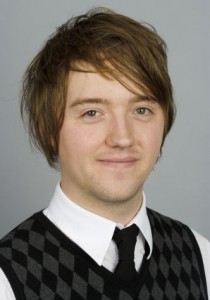 Adam told me that the machine was made in the 1920s. At this time the medical profession sought to direct the recently harnessed power of electricity towards the alleviation and cure of medical complaints.

A fascination with electricity led to the misguided belief that a raft of ailments could be cured by exposing the body to ultraviolet light. Violet ray machines came with a set of ultraviolet emitting glass electrodes, to be directed over the body surface or inserted into various bodily orifices.

It was not until the 1950s that medical consensus denounced the spurious cure-all claims of the violet ray manufacturers.

Lou will have looked carefully at all of the objects components before starting work. She will have recorded her actions in the main collections management system so that other people know what work has been carried out on the object and when.

An extract from Lou’s report:

Work carried out: I began by using a low suction vacuum cleaner and soft bristle brush to remove the loose surface dirt. I then swabbed the surface using a solution of 10 % Triton X-100 (a non-ionic surfactant) in deionised water to remove the ingrained dirt. The same solution was also used to clean the glass attachments. A blunt scalpel blade was used to reduce the copper corrosion product on the end of one of the glass attachments, this had to be carried out using a microscope. A layer of Microcrystalline wax was applied with a soft cloth to revive the wooden and metal surfaces, offering a protective barrier.

The case had a large crack running down one side resulting in the top edge joint failing, fish glue was injected in to the failed edge and down the crack, quick release clamps were then administered to close the gap whilst the glue dried.

Inside of the case was vacuumed to remove the loose dirt particles. 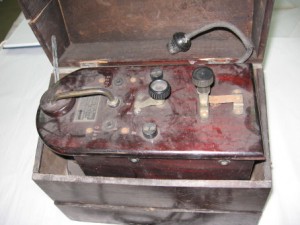 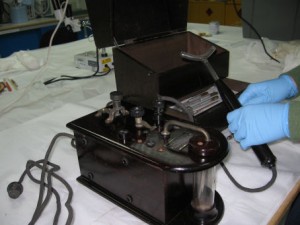 Come along to South Shields Museum and Art Gallery to see the object for yourself.