A Whale of a Newcastle Tale – by Jo Anderson, Assistant Keeper of Archaeology

Our ethnographic collection has originated from many different sources.  Explorers, missionaries, other museums – we’ve been accepting interesting objects from around the world for centuries.  During my time researching the North American collection, I’ve discovered that some of the objects from Arctic regions have a direct link with an industry that Newcastle upon Tyne used to be famous for: whaling.

Nowadays, commercial whaling is banned by many countries including the UK, but 250 years ago, whaling in Arctic waters was big business.  Whales were hunted in vast numbers mainly for their oil which was used in a variety of products at the time and was highly valued as an illuminant.  Newcastle was a focal point for whaling activity in the northeast of England, often rivalling the great whaling port of Whitby.  Even when British whaling began to decline in the 1820s, Newcastle still had a fleet of whaling ships that would venture to the Arctic waters near Greenland- sometimes returning back to the River Tyne with some very interesting souvenirs that they had traded for with the local Inuit. 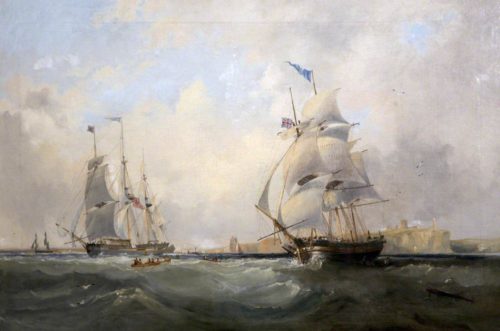 The Lady Jane was a 313 ton ship originally built on the Thames in 1722.  By 1804 she was Newcastle-based and became a highly successful whaler.  In 1827, the Literary & Philosophical Society of Newcastle upon Tyne was given three objects that had been brought back from arctic waters on the Lady Jane by its commander, Captain Fleming.

These implements gave the people of Newcastle a rare glimpse into Inuit life.  The adze in particular is of interest, due its metal content. Iron was rare in the northern Arctic regions, but Inuit would salvage any kind of metal from shipwrecks, which is what appears to have happened with the adze.  It is thought to have been made using the mast hoops from the Aurora or Dexterity – ships that were wrecked on the west coast of the Davis Straits in 1821. 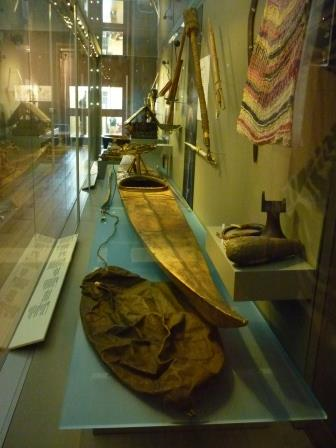 Captain Leask’s kayak and hunting equipment on display in the World Cultures gallery.

They are wonderful objects and enable us to see first-hand the high degree of skill needed by Inuit to create vital pieces of hunting equipment.  While they are remarkable historical artefacts, the fateful story of their collection is somewhat harrowing.  The Lady Jane had set sail in 1835, but by December the ship was frozen in sea ice near Greenland.  The ship finally returned to Newcastle in March 1836, by which time 27 of the crew had died from scurvy and other illnesses. The deprivations the ship’s crew underwent during that winter was dreadful.  James Williamson from South Shields was a young doctor on board during this time, and his journal notes many harrowing experiences.  On his return to Newcastle, Captain Leask was accused of incompetence by his surviving crew.  Although a public enquiry was conducted into the disaster, Captain James Leask was completely exonerated of all charges.

Another famous Newcastle whaling ship also appears in museum records.  The Lord Gambier was brought into the whaling trade in 1831.  At 407 tonnes, she was an even bigger vessel than the Lady Jane.  Captain Richard Warham was commander of the Lord Gambier and he brought back many artefacts and specimens from his voyages to the Arctic, including a beautiful Inuit seal skin shoe, and more famously Eric the Polar Bear. 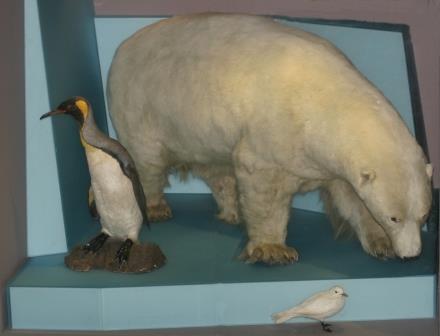 NEWHM : M0934, Polar Bear on display in Living Planet gallery.  Shot by a crew member of the Lord Gambier in the Davis Straits, off Greenland, 1835 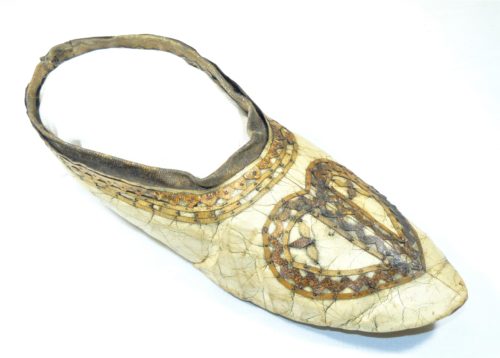 By the early 1840s, the whaling industry was in serious decline on Tyneside.  The market for whale oil was decreasing and there had been too many disasters in Arctic waters where ships had been crushed by sea ice.  Combined with a dramatic fall in whale numbers around Greenland, it meant that too many voyages were unproductive, forcing ship-owners to review their trade.  By 1842, the Lord Gambier had been withdrawn from whaling activities along with another Tyneside-based whaler, the Grenville Bay, leaving the Lady Jane as the only active whaling vessel operating from Newcastle.  She was destroyed in 1849, crushed by sea ice on her final whaling voyage. 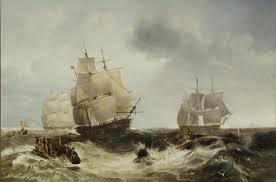 The Lord Gambier, Lady Jane and Grenville Bay whaling in the Arctic, by John Wilson Carmichael

The Inuit material that whaling ships brought back to Newcastle are powerful historical objects, offering us an insight into a way of life that existed 200 years ago for the peoples of the Arctic regions.  Little could the Tyneside whalermen know all those years ago that the “souvenirs” of their voyages would be so important and highly regarded in the 21st century.

This research was made possible by a Headley Fellowship