A trip into the past in Jesmond Vale 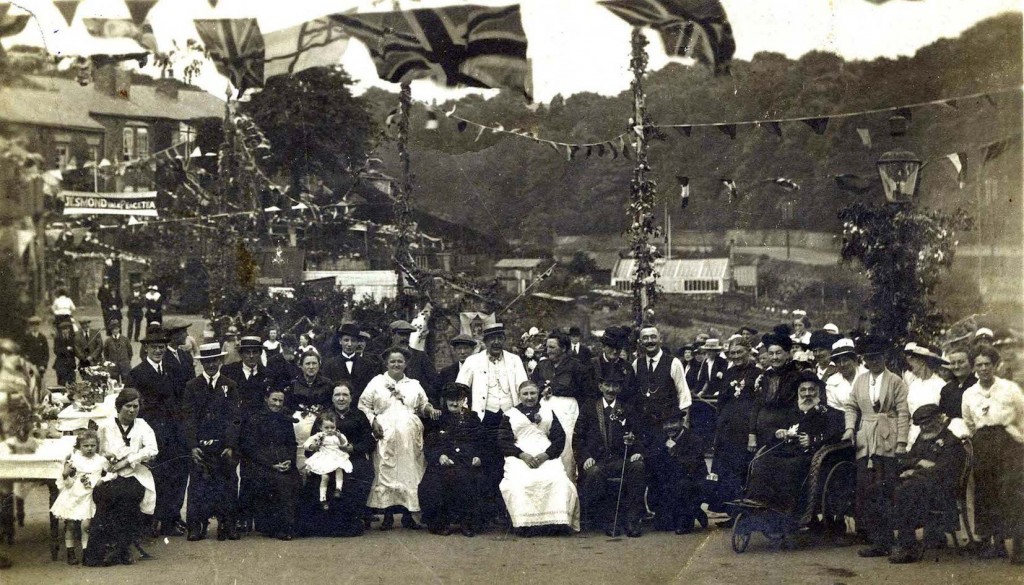 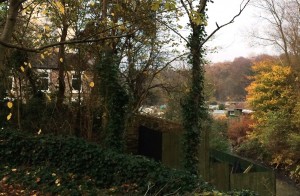 At the time of the First World War, there was a thriving community along the edge of the Ouseburn in Jesmond Vale. The street pictured is probably Woodbine Terrace, in the Vale, which has since been demolished. However, we can still see a similar scene from Burn View, which did survive. We’re looking across the burn towards Armstrong Park and Heaton Park.

The  old photograph shows Jesmond Vale Peace Tea, which was held on Wednesday August 13th 1919 to celebrate the Peace Treaty at the end of the war. It looks like prizes have been laid out on the table on the far left, for the children’s fancy dress competition and possibly also for sports. The tea party collected £2 (quite a large sum at that time) for the Blinded Soldiers’ and Sailors’ Fund, which was run from The Evening Chronicle office. It was handed over by Mrs Welsh – very probably the wife of R. Welsh, brass finisher, who lived at 1, Woodbine Terrace in Jesmond Vale (Ward’s Directory of Newcastle upon Tyne, 1918). I like to think that she’s the woman in the white dress with a spray of flowers pinned to the bodice, standing near the centre, but I don’t know for certain. 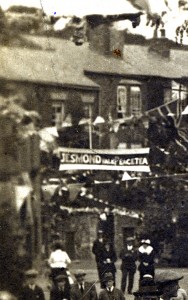 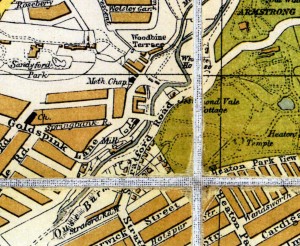 As well as flags and bunting, the villagers have strung up a ‘Jesmond Vale Peace Tea’ banner. Woodbine Terrace is marked on the centre top of the map section, which is taken from Bacon’s Map of Newcastle upon Tyne of 1920 (Newcastle City Library Local Studies collection). Jesmond Vale extends from Jesmond Dene to Sandyford and on to the Ouseburn area. There was a chapel, a mission hall, Sunday school, and three pubs. One of these, the Blue Bell, survives. 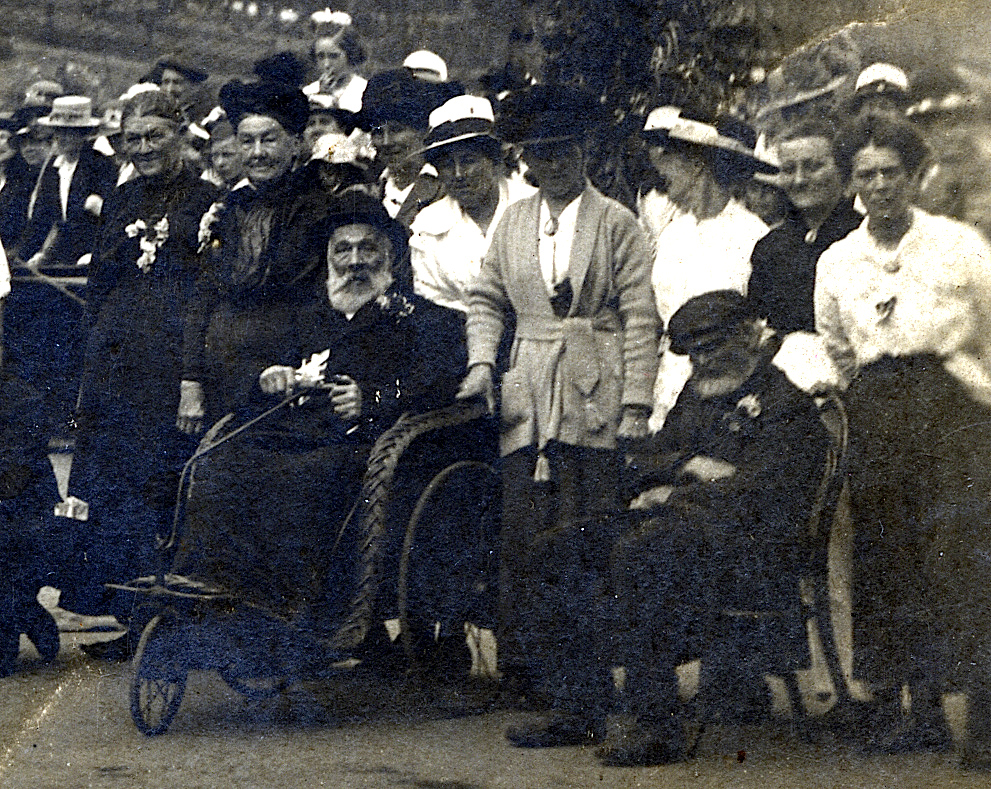 The Vale party was one of the 1919 Peace teas that included needy elderly people. Generally, they would be given a present of money – anything from sixpence to two shillings. The men also usually received tobacco and the women were given packets of tea. 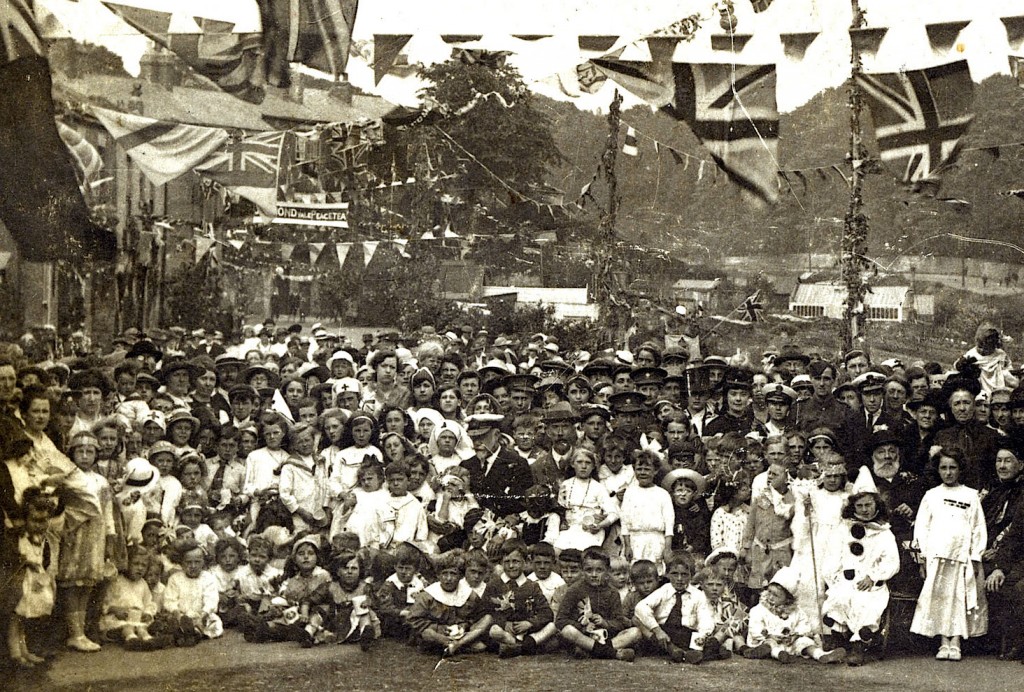 A large number of children attended the celebration, as we can see in another photograph of the event. There are also some ex-servicemen in the crowd, both soldiers and navy men. It’s such a large party that it may have included people from streets leading down to the Vale, as well as from Jesmond Vale village itself.

The tradition of greenhouses and allotments in the Vale has continued, as the modern snapshot shows. During the war, extra allotments were set up all over Britain to provide food and reduce pressure on the merchant fleet, which was at risk of attack by the German submarines. 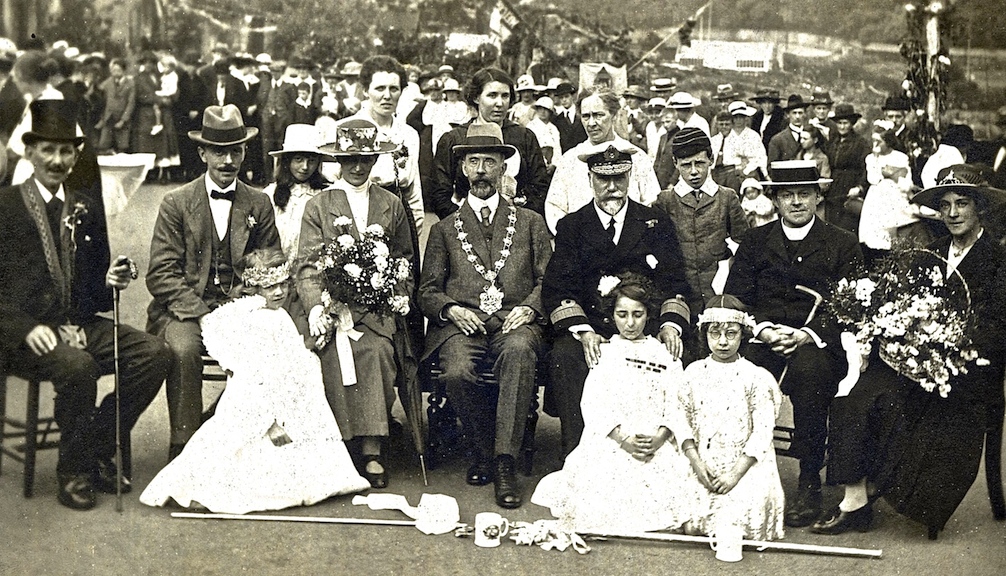 The Deputy Lord Mayor, Richard Mayne, is in the centre of this line-up, wearing a chain of office (he’s identified in the photo of the event that appeared in The Illustrated Chronicle). The man on the far left may be Mr Martin, known locally as the Mayor of Jesmond. According to Newcastle Libraries booklet Bygone Jesmond Vale, he lived in the village, and wore a top hat on ceremonial occasions (rather over-formal for a tea party such as this). I’ve checked, and the decoration he wears is nothing to do with Newcastle corporation, so it looks like he made up his own regalia. 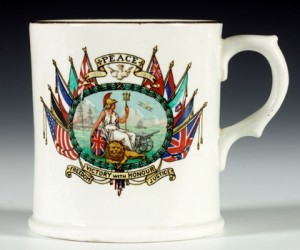 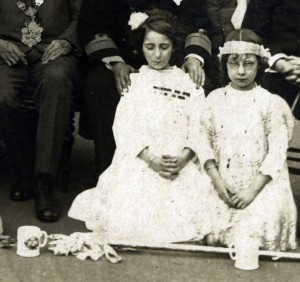 At quite a few of the Victory teas, the children received commemorative mugs, like those on the ground by the two girls in the photo. Occasionally, some lucky children were also given a Peace Medal. Mugs, medal and Victory tea photographs are some of  fascinating things you can see in the exhibition When the Lamps Went out: Life on Tyneside in the First World War at Discovery Museum until 28th June.

There’s also many things to see in Home of Heroes: Home of Heroes: South Tyneside in the First World War until January 25th at South Shields Museum and Art Gallery. Another exhibition on Tyneside’s war experiences, Coal, Ships and Zeppelins,is on show at Segedunum until 26 April.

2 Responses to A trip into the past in Jesmond Vale