Maritime History
Posted by administrator on November 22, 2010     Permalink     Comments (6)
On this day 100 years ago, 22nd November 1910, sailors on board the Brazilian battleship, Minas Gerais, mutinied and took control of their ship. So, you might reasonably ask, what has that got to do with Tyne & Wear Archives & Museums? Well, four ships took part in the revolt of which Minas Gerais, and the light cruiser, Bahia, were both built by Armstrong Whitworth at Elswick (a district of Newcastle) on the River Tyne. At the time Minas Gerais was the most powerful dreadnought battleship in the world and Bahia was the fastest cruiser. 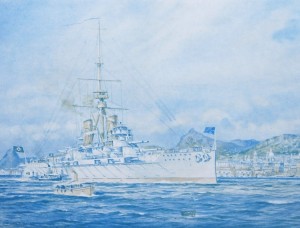 Artist’s impression of ‘Minas Gerais’ on the launch card 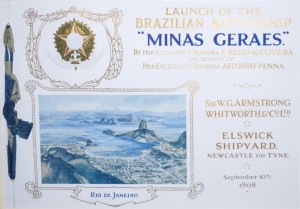 The revolt was so serious because of the huge destructive power that would have been unleashed if Minas Gerais had fired her broadside of ten 12 inch guns at Rio de Janeiro. The crews of both Minas Gerais and Bahia had been sent to Newcastle to learn how to operate their ships and then to sail them back to Brazil. It is believed that the men’s experience on Tyneside, including their exposure to trade unionism, may have influenced their decision to revolt. After fitting out and sea trials both ships sailed for Brazil early in 1910. 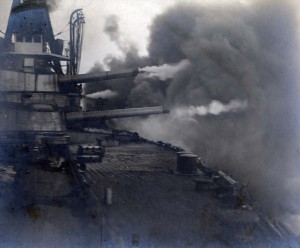 Minas Gerais firing a broadside of her 12 inch guns

Leaving aside the Newcastle connection the mutiny itself is of great interest. A large proportion of ordinary Brazilian sailors were black and were either freed slaves or more often the sons of freed slaves – slavery was only made illegal in Brazil in 1888. They were badly treated, not able to become officers, badly paid and badly fed. They were also subject to severe punishment floggings, even though this form of punishment was illegal.

Some months after the ships returned to Brazil the crew of the Minas Gerais mutinied following a particularly brutal flogging of a black sailor on November 22nd 1910. They were quickly joined by the crews of the Bahia and two other ships. The mutineers were led by an experienced and clearly charismatic black sailor, Joao Candido, who the press named ‘The Black Admiral’. He ordered normal drills to be continued and threw all supplies of alcohol overboard. The mutineers demanded better pay and conditions and the end to flogging. They backed up their claims with a threat to shell Rio de Janeiro. As the ships moved through Guanabara Bay on the morning of the 23rd November they discharged their 4.7 inch guns as a signal that the revolt had begun. 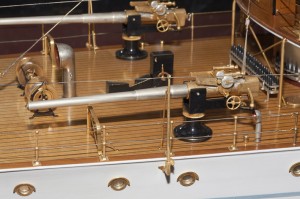 One of the 4.7 inch guns on the museum’s model of Bahia 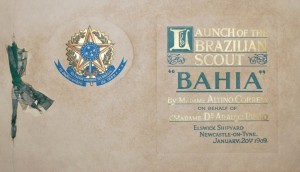 The government gave in after a few days and granted the rebellious sailors amnesty. However it did not take long before the rebels were being persecuted, forced out of the Navy, imprisoned and even killed. 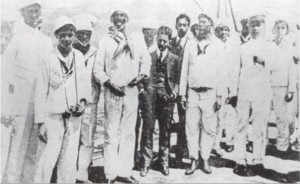 Joao Candido (fourth from left) with reporters, officers and sailors on the battleship, Minas Gerais, 26 November 1910, the final day of the mutiny

Less than a month after the revolt Candido was imprisoned in a small cell with 17 other sailors. Only he and one other man survived the first weekend of confinement. He was later sent to a mental hospital before spending the next 40 years working as a fish market porter. Two years ago a statue of him was erected on the waterfront in Rio.

So today I salute Joao Candido and his comrades, who, 100 years ago today, threatened to use the most mighty instruments of war to pursue just treatment and the end to flogging.