A piece of the ‘Get Carter’ car park

This week I asked Sarah, Keeper of Contemporary Collecting, to tell us about a piece of the Gateshead car park that we recently collected. 2011 is the 40th anniversary of the release of the film ‘Get Carter’. The film starred Michael Caine and filming took place in Newcastle and Gateshead.

Sarah said ‘We have recently collected a piece of concrete rubble taken from the demolition site of the Gateshead multi storey car park.  The car park was a significant part of Gateshead’s skyline for over 40 years.  By preserving this piece of concrete it will help us to tell the story of the history of Gateshead. 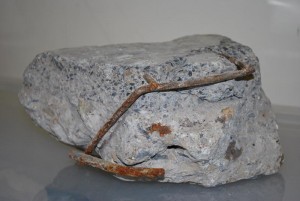 The car park had a prominent role in the 1971 film ‘Get Carter’ starring Michael Caine and is often referred to by locals as the ‘Get Carter’ car park.  We have collected some photos of it during demolition and recently we received a painting of the high level bridge with the familiar silhouette of the car park in the background. 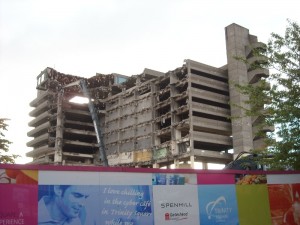 We were advised that it was too dangerous to go on site during the demolition works so they took a skip-full of rubble off site for us to choose from.  I had to scramble through a pile of rubble to find a suitable piece!  I wanted a piece which showed steel reinforcement.  It had to be stable and unlikely to crumble and it couldn’t be too heavy to lift or too big to fit into a display case. 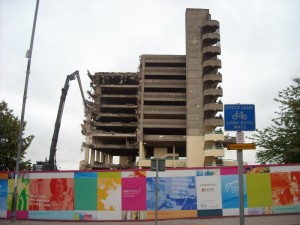 Since collecting the rubble smaller pieces of concrete have become available to members of the public to buy in a souvenir tin.  It would certainly be a talking point to have this sat on your mantelpiece! 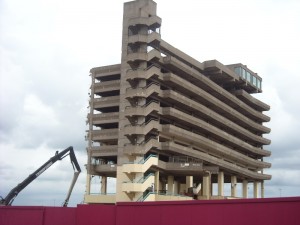 4 Responses to A piece of the ‘Get Carter’ car park