A look at the dodo

The collections held in the Great North Museum Resource Centre contain an intruiging little cardboard box labelled ‘Dodo bones’. I’ve recently had a request from a researcher to look at these bones and it’s given me a rare oportunity to open up the box and carefully unwrap these unusual specimens so that I can photograph them.

At first glance, they’re rather unremarkable. They are small and brown, some with traces of dirt and others old glue, where someone has tried to reconstruct the skeleton in the past. Looking more closely, the bones show some very interesting features.

It’s always intruiging to look at the remains of extinct organisms. The Dodo is famously extinct – it’s become synonymous with the concept. It is also famously inept. A previous scientific name for the bird was Didus ineptus. We’re used to thinking of the Dodo as stupid, fat and slow, because that’s how I’ve always seen it depicted in cartoons. 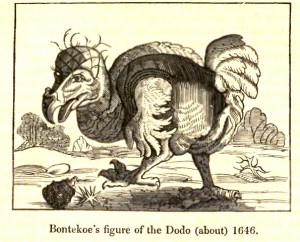 A very dopey (and rather scary) looking Dodo in this contemporary illustration from the 17th Century.

A  20th Century model of the Dodo is in our collection, and shows the classic conception of the animal. A dumpy, dopey bird with a huge rear end decorated with a silly tuft of feathers. A creature doomed to be wiped out as soon as the European sailors turned up looking for fresh meat. 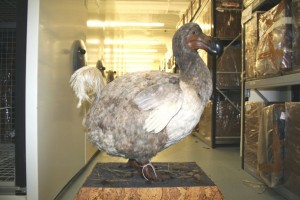 An early 20th Century model of the Dodo

But this is rather unfair. Animals living on isolated islands, a long way away from people or other large predators (and the Dodo’s home, Mauritius was just such an island) have no fear of being eaten. The Dodo’s alleged stupidity was probably just the result of evolving in the absence of any threat from large carnivores.

And what do the bones tell us? The 14 small bones in the collection include a mandible, fragments of the pelvis and a number of limb bones from the bird’s stocky legs and small wings. These fragments can tell us something about what the dodo was like.

The bones of the lower mandible show a large bill, and with its powerful hooked tip, it could probably have delivered a pretty nasty nip (lets hope a few of those 17th Century sailors got some bruised fingers).The dodo’s limb bones reveal that it had powerful legs and would have probably been able to put on a fair turn of speed. 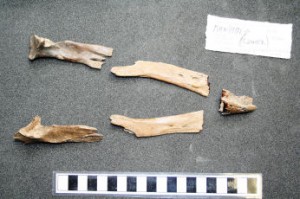 Bones from the lower mandible of a Dodo 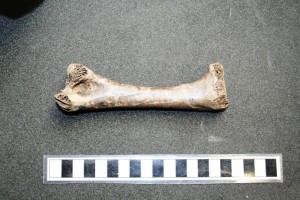 Femur from a Dodo

It’s always exciting when we get the opportunity to learn more about the specimens in the collection. I’ll be very interested to see what the researcher has to say about these.

One Response to A look at the dodo