Sometimes the smallest objects in the museum have the most interesting stories to tell. This small gold coin, for example, was one of the most significant coins in the Ancient World. It is called a daric after the Persian King Darius I (521–486 BC) who first produced these coins. The coin represents the Persian Great King in a kneeling-running stance. The bearded and crowned king holds a spear in his right hand and a bow in his left. The daric emphasised the power and wealth of the Persian King. Portraying him as an armed warrior it would have reminded those who encountered the coin that the Persian Empire was built on military might and the King’s access to great reserves of valuable commodities including gold. Darics continued to be issued by Persian Kings long after the death of Darius I. In fact they only stopped being minted when Alexander the Great conquered the Persian Empire at the end of the fourth century BC. 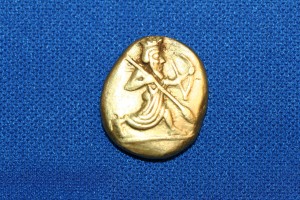 The Persian Empire was the superpower of the Ancient Near East from the 6th to 4th centuries BC, controlling a vast amount of territory stretching from the borders of India in the East to the west coast of Turkey and even into northern Greece. Coinage created in the Persian Empire was almost exclusively used for trade with the Greeks, and not for inter-imperial trade. In most of the Empire goods were exchanged through a system of barter. Most of the Persian Empire’s coinage was produced at Sardes at the western edge of the Empire which was closest to the Greek world. Darics were frequently used to pay Greek mercenaries serving in Persian armies and to bribe Greek politicians to adopt policies favourable to Persia. According to the Greek writer Plutarch the Spartan King Agesilaus II, who attacked the Persian Empire, was driven out of Asia by “ten thousand archers”. These were not the Persian King’s soldiers but the 10,000 darics he distributed to Agesilaus’ enemies to cause trouble back in Greece and make him abandon his campaign. 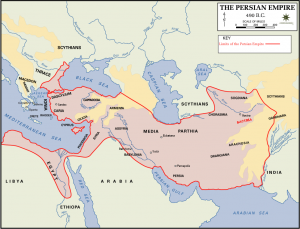 Map of the Persian Empire

This coin is on display in the Shefton Gallery in the Great North Museum.