One of the reasons I was so excited to work on the ‘We Mak’em’ Sunderland Shipbuilding archives project was the opportunity it gives me to catalogue and make accessible large quantities of unlisted documents that have never been available to the public before. However, the project also requires me to look at a large number of shipyard records that were listed many years ago. These early lists have been available to researchers for over twenty years and in many cases the quality is very good. It’s become clear, though, that inaccuracies in some of the old lists could be preventing researchers from unlocking the full potential of these collections.

I’m currently cataloguing the records of the firm, Short Brothers, whose shipyard was based at Pallion. During this work I recently came across two boxfiles of papers that were previously listed as ‘papers concerning liquidation of the Nitrate Producer’s Steamship Company, 1896-1919’. Judging by that description I wasn’t expecting the contents of the files to be particularly exciting. On closer inspection, though, I discovered that they were far more interesting than the original description suggested.

The boxfiles actually contain a lengthy series of correspondence between Short Brothers and the company Lawther, Latta & Co. Ltd, covering the period 1896-1919. Lawther, Latta & Co. managed a number of shipping companies, including the Nitrate Producers Steamship Company Ltd, and most of their cargo vessels were built by Short Brothers. The Short family were also major shareholders in shipping companies managed by the firm. These links between the two firms were strengthened even further in 1896 through the marriage of John Latta and Ada Mary Short, daughter of John Young Short.

Most of the correspondence in the two boxfiles is between John Latta (later Sir John Latta after his knighthood in 1920) and the leading members of Short Brothers, namely John Young Short, Joseph Short and Thomas S. Short. The correspondence is mainly concerned with business affairs, which is very interesting in itself, but it also gives a unique insight into the personal lives of the correspondents, their families and their social circles. This mixture of business and pleasure makes the letters particularly fascinating and gives you a real sense that you have stepped into their world.

Perhaps reflecting the formality of the times, Latta’s letters to his father-in-law are always addressed to ‘My dear Mr Short’. The letters often refer to home and social life, including details of visits and family illnesses. Indeed the last letter by John Young Short was written on 24 January 1900, the day he died, and is particularly poignant as it discusses influenza passing through his household.

The correspondence often relates to vessels built by Short Brothers for Lawther, Latta & Co. There are also lots of references to Short Brothers affairs, including a legal dispute between the shipbuilders and one of their customers, the shipping company British Maritime Trust Ltd. This dispute concerned the quality of workmanship on the vessel ‘Cebriana’ and in a letter of 24 November 1900 to Joseph Short, Latta refers to rumours “… that there was an impression on the market that your men were not equal to the best workmen on the East Coast”. 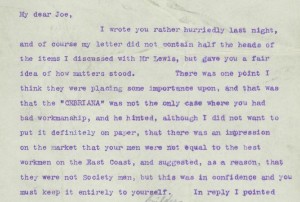 John Latta’s close family links meant that he could write with a frankness that other correspondents might not dare. As an influential figure in the shipping industry he was also in a position to discover and report information of real interest.

By far the most prolific correspondents are Latta and his brother-in-law, Thomas S. Short. The tone in these letters is relaxed and informal. The letters mainly discuss the business affairs of Short Brothers and the Nitrate Producers Steamship Company Ltd. However, there are also many references to the progress and conduct of the First World War, especially the heavy shipping losses inflicted by German submarines and the difficulties faced by shipbuilders. Typical of these letters is one by Latta of 13 December 1916 in which he states:

“I am rather disposed to agree with you that the country is now ready to accept any form of dictatorship which on its face appears to favour a policy likely to assist in winning the war.” 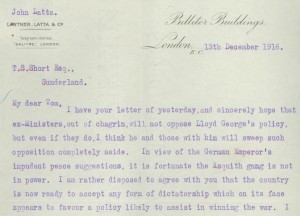 Thomas Short in his letter of 20 December 1916, while condemning Government policy as “like Socialism gone mad”, felt as regards the War “if we can only keep up the pressure more than we have then we have them absolutely beaten”. 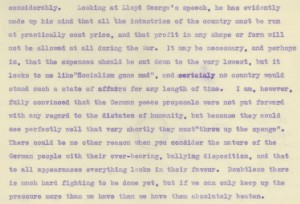 These two boxfiles of correspondence should be of interest to a wide variety of researchers. They are far more exciting than their original description suggested and I hope that their new description, when it goes live in our online catalogue, will raise their profile and make them accessible to all interested parties.