Up and down the land, museums and archives hold millions of objects in their collections. Of those objects, only a few are ever displayed. The rest lie quietly in museum boxes awaiting rediscovery.

Recently, Dr James Gerrard of Newcastle University’s School of History, Classics and Archaeology, borrowed a box of Roman pottery from the Great North Museum. In this box were a few dozen sherds of shiny red pottery known as samian or terra sigillata (Form 36). Much to James’s surprise, one of the fragments had the name ‘AVDAX’ scratched on it. 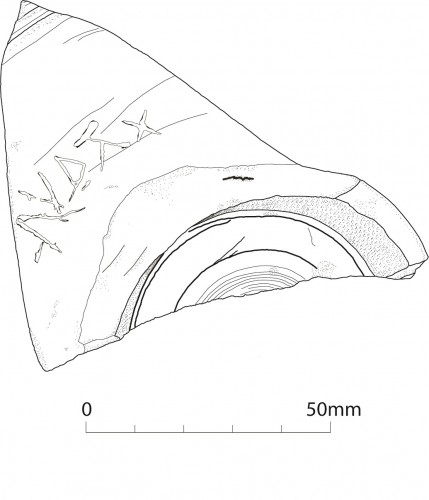 ‘Audax’ is a Roman personal name and Dr Roger Tomlin, a leading expert in Roman inscriptions from Oxford University’s Wolfson College, thinks that it might be the name of a Roman soldier meaning ‘bold’ or ‘daring’.  Other people called Audax are known from Roman Britain, but it’s lovely to rediscover this Roman soldier from the depths of the Museum’s collections.

Label attached to the pottery

We’re not entirely sure where the sherd was found. An old label with the piece of pottery hints that it might have been found at Corbridge. Certainly other finds from the Corbridge excavations made their way into the GNM’s collections, so this wouldn’t be surprising.