While scouring the archives a few years ago for a suitably seasonal image to use on the office Christmas card, Tyne & Wear Archives staff discovered a short series of 35mm photographic slides in the personal papers of local historian John Rippington (our ref: DF.RIP), showing festive window displays and decorations from around Newcastle upon Tyne throughout the 1960s. A large number of these slides showed different displays used in the arcade windows at the now-defunct Callers furniture shop on Northumberland Street – described by one observer as “a delightful yuletide exhibition”, but perhaps more accurately as ‘gaudy and deeply unsettling’. 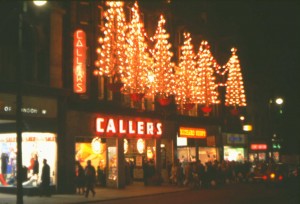 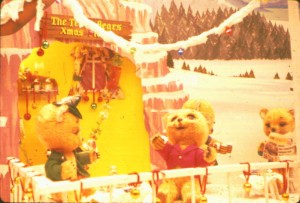 It was one such presentation in 1969 that very nearly caused the destruction of the entire city centre. On the evening of Sunday 30th November, the usual crowds of excited children and psychologically-battered parents had turned out to see Callers’ attractive and magical animated Dickensian-themed display. However, one sharp-eyed father, his mental faculties not yet fully smothered by the demands of the festive period or an excess of cheap sherry, found his attention drawn to a thin plume of smoke rising gently from the head of a mechanical street urchin, and rushed to a nearby telephone box to alert the fire service. 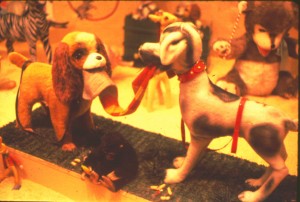 Ape hates it when those two fight. Callers, December 1964

Within a few minutes the entire ropey display, built mostly of papier-mâché and polystyrene, was alight, the flames being helped along nicely by the electric fans powering the toy windmills decorating the ceiling of the store’s arcade entrance. The fire quickly took hold, spreading throughout the shop and into the building’s upper floors by the time Newcastle & Gateshead Fire Service arrived. They could do nothing to save the building, but their efforts were vital in ensuring the flames did not spread any further, or leap across the road to the other side ofNorthumberland Street, which would have been disastrous. 88 firefighters using 15 appliances struggled for five hours to bring the blaze under control, and another four to extinguish the conflagration using high expansion foam.

This was the worst fire seen in Newcastle’s city centre, causing upwards of two million pounds worth of damage. Callers and the adjacent Van Allan and Richard shops were completely gutted. After inspection, the building façade was declared unsafe, and demolished shortly afterwards. Miraculously, only three people were injured – including Leading Fireman Harry Louvre, commended for his bravery, who continued to fight the blaze for four hours after sustaining severe burns to the hands and face.

A series of photographic negatives held by the Archives and taken by Newcastle photographers Turner Visuals Ltd. (our ref: DT.TUR) on the morning of 1st December 1969 shows the aftermath of the festive conflagration that almost ruined everybody’s Christmas. 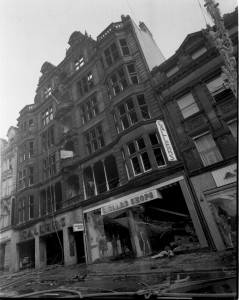 Tyne & WearArchives wish all our readers a Merry Christmas and a Happy New Year, and would like to remind them to switch off their fairy lights before they go to bed.

2 Responses to A Christmas Conflagration