A celebration of royal visits to Tyne and Wear

On 22 November Prince William will be visiting Sunderland and South Tyneside to take part in a number of youth development events.  During the visit he will also officially open Haven Point, the new leisure centre in South Shields.

To celebrate this Tyne & Wear Archives has produced a short flickr set remembering past royal visits to the region’s shipyards.  Most of the visits featured here took place during difficult times and gave a real boost to public spirits in the face of two World Wars.

The visits also helped to strengthen the bonds between the people and the monarchy. During the First World War King George V and Queen Mary, Prince William’s great-great-grandparents, made hundreds of visits to meet their subjects.  By 1917, there was widespread anti-German feeling resulting from the War and George V’s decision to change his family name from Saxe-Coburg-Gotha to Windsor and his efforts to connect directly with people were vital in preserving the royal family’s popularity. 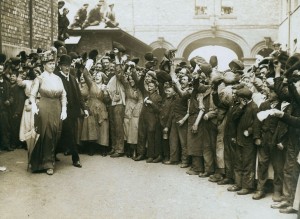 In a similar way, the solidarity that George VI and Queen Elizabeth showed with their people during the Blitz helped to heal earlier wounds caused after Edward VIII abdicated in 1936. 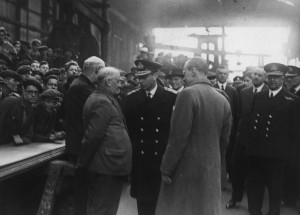 King George VI meets some of the oldest serving employees at the shipyard of Hawthorn Leslie, Hebburn, 7 April 1943 (TWAM ref. 2931)

In the last image, I particularly like the cheeky faces of the two young men on the left, who are ignoring their illustrious visitor and looking straight at the camera instead.

The new flickr set also includes several images of a visit by Princess Elizabeth in 1946 to launch a cargo ship at the Sunderland shipyard of Sir James Laing & Sons Ltd. Although this came after the Second World War it still took place at a time of great hardship.  Rationing remained in place and the country had emerged from the War deeply in debt.  In the circumstances a royal visit by the future Queen brought some much needed glamour and cheer. 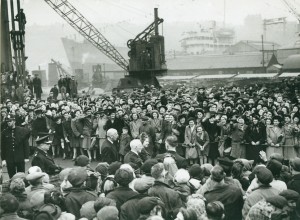 Princess Elizabeth on a walkabout after the launch of the ‘British Princess’, Deptford, Sunderland, 30 April 1946 (TWAM ref. DS.LG/4/PH/4/1)

These images are part of the Tyne & Wear Archives Shipyard Collection. In July 2013 the Collection’s outstanding historical significance was recognised by UNESCO through its inscription to the UK Memory of the World Register.  You can enjoy all these images and many more by visiting the Archives in person. Details of our location and opening times can be found on our website.

You can also see excellent images of royal visits to Washington in a recent flickr set produced by the Archives for the Washington Heritage Festival.

This blog has been produced to celebrate the Explore Your Archive Campaign.

To find out more about archives, and how you can start your own adventure visit www.exploreyourarchive.org