Between Friday 1 and Sunday 3 October I visited Elterwater in the shadow of the Langdale Pikes to attend ‘KS10’, the 4th annual ‘Kurt Schwitters Autumn School’ held on the site (and in nearby Chapel Stile village hall) where Kurt Schwitters’ Merz Barn wall, which now resides in the Hatton Gallery, was originally created.

These ‘Schools’ (which is a far too formal description for what are in fact very lively informal gatherings of a wide variety of people) are organised by Littoral, a non-profit arts trust which promote creative partnerships, critical art practices and cultural strategies in response to social and environmental issues, and who also own the site at ‘Cylinders’ where the barn is situated and are actively engaged in promoting Schwitter’s legacy in Britain. 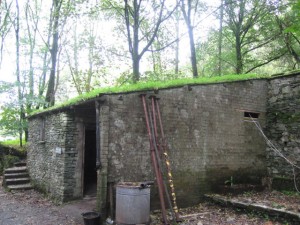 The School was particularly exciting this year as I had the opportunity to meet some ‘VIPs’ from the international Schwitters ‘community’ including John Elderfield, currently Chief Curator Emeritus at MoMA, New York who delivered the Friday evening lecture, Dr Isabel Schulz, Curator of the Kurt Schwitters Archive at the Sprengel Museum in Hannover and Derek Pullen, Head of Sculpture Conservation at the Tate. Speaking with them, all were very interested in our plans to improve how the wall is currently presented to visitors as part of our planned refurbishment and in my own current research to uncover the full story of how the barn came to be given to the Hatton.

Rob showing his research on the Merzbarn to John Elderfield, who is a Schwitters expert and Chief Curator Emeritus at the Museum of Modern Art in New York